Was this article useful?
Click the thumbs up >
The general rule in the industry is that the car market is analysed by segment – how the Ford Focus is doing against other lower medium models, for example.

However, all rules have their exceptions: if one segment is growing directly at the expense of another, would it make sense to combine them, even if the cars are dissimilar?

A prime example of this dilemma comes from the executive and luxury off-road segments. Executive models have been steadily losing share for many years, but what if potential 5-series customers are simply buying X5s instead?

To a buyer, there are probably more similarities between an X5 and a 530d estate than between a 5-series and a supposedly direct competitor like the Peugeot 607.

The news that customers are virtually besieging dealers across Europe to get the new Q7 shows the degree of intra-brand crossover: these are not Volvo XC90 customers desperate to trade in their Volvos – these are customers who like the idea of an Audi SUV in preference to an A6 Avant.

If you put the share of the two segments together, they show a picture of remarkable long-term stability (see graph). This is despite the virtual elimination of volume executive models (Vauxhall Omega, Ford Scorpio, etc).

Half the cars in the traditional executive segment have ceased to exist, yet they have been almost exactly compensated for by luxury off-roaders.

This presents manufacturers with added complexity in their planning process. When planning an executive model, they still have to look at sales of competing models to work out their own sales forecast, but they also need to look at what is happening to luxury SUV models.

Prestige carmakers have to treat, say, an A6 and a Q7 as alternative body styles of the same basic idea – except the cost differences are much greater. This also makes the price of failure much higher.

While you can never rule out a change in mood, it is clear that off-road vehicles are proving remarkably resilient.

The fuel price increases towards the end of 2005 were met with a jump of 8.1% in sales of off-roaders in the last quarter and buyers seem to take no notice of the arguments of Greenpeace. Security seems to be all, and the argument that “I am protecting my children” trumps all others – even when there is little scientific evidence to support it.

If consumers simply see off-roaders as an alternative bodystyle, it is no wonder the backlash is a long-time coming.

Is the executive segment growing or shrinking? That depends how you look at it. Traditional saloons and estate sales have shrunk, but plush off-roaders have more than made up the difference and may take pole position this year.

For manufacturers, it would now be absurd to view the two segments as operating independently of each other. Pretty well anything with five or more seats in the £30,000-50,000 price range is a competitor. 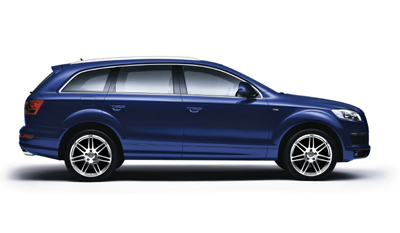 The Audi Q7 is causing a stir at dealerships