Was this article useful?
Click the thumbs up >
Chrysler will launch the estate version of its 300C in the UK in April with prices starting from £27,250.

The 300C Touring has already sold over 3,100 units across Europe and will be available in the UK with 3.5-litre V6 and 5.7-litre HEMI petrol engines and a Mercedes-Benz 3.0-litre CRD diesel engine.

The Touring model shares the same specification and engines as the 300C saloon that was launched at the end of 2005, but increases load space. With the rear seats occupied, the Chrysler 300C Touring’s load area holds 630 litres of cargo, compared with the saloon’s 504 litres. With the rear seats folded down, 300C Touring’s cargo capacity is increased to 1,602 litres.

The Touring has the same levels of standard kit as the saloon, with the addition of a rear cargo organiser and cargo cover. Standard features on the Chrysler 300C include ESP and an all-speed traction control system, front and rear side-curtain airbags, xenon headlamps, rain-sensing windscreen wipers and a rear park assist system.

Air conditioning and heated leather driver and front passenger seats also come as standard on all vehicles in the range. The 300C 5.7-litre V-8 Hemi comes with an extra £2,925 of standard equipment (sunroof, California walnut trim, GPS sat-nav with six-disc CD) compared to the other cars in the range. 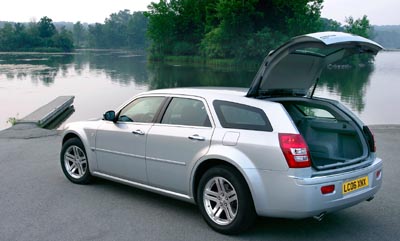