Was this article useful?
Click the thumbs up >
Volvo’s 2007 model year XC90 will make its UK debut at the British International Motor Show in July, when it is also expected to arrive in showrooms.

A new V8 will be one of the engines available in the new XC90 in the UK, together with Volvo’s new 3.2-litre straight-six engine, recently launched in the new S80 saloon.

The new XC90 has redesigned lights, plus a wide chrome detailing above the number plate, full-width rear scuff-plate and new bumper with more body colouring.

At the front there’s a new grille with more chrome and larger Volvo iron mark badge, plus bumpers with more colour-coding. The new XC90 is also has new 18 inch alloy wheels and colour-coded side mouldings and door handles. In addition, larger door mirrors are now colour co-ordinated and incorporate the side indicator. Customers can choose from shadow blue, electric silver and white pearl colours. Brushed aluminium roof rails are also available on higher trim levels.

Interior specification includes an upgraded centre console with a new display and aluminium-effect trim, RTI (road and traffic information) satellite navigation system which now works from a hard-disk based system (instead of DVD).

The standard High Performance audio system will now play CDs with music in MP3 and WMA formats and is equipped with an auxiliary input to connect extra equipment, such as i-Pods and other MP3 players.

The XC90 has active bi-xenon headlights which turn 15 degrees in either direction to follow the curves of the road.

There is also the extra option of a park assist camera to aid parking and give an improved view of the area behind when reversing as well as showing ‘help lines’ of the car’s planned path or track.

The wide-angled camera is designed to avoid excessive distortion and previews a large area via the car’s RTI navigation screen on the dashboard.

Prices and more detailed specification will be announced nearer the car’s launch in summer. 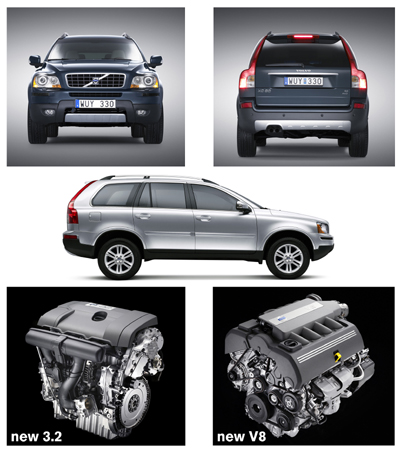