Was this article useful?
Click the thumbs up >
Cadillac claims the UK market is crucial to its success in Europe, but has refused to be drawn on sales targets.

Instead, the brand says it wants to regain its upmarket image and expects to be selling 20,000 cars across Europe by 2010.

“We aren’t going to talk about the UK specifically but it is an incredibly important region for Cadillac. Along with Germany it is more open to change than any other market,” says Malcolm Wade, director of sales for Cadillac and Corvette Europe.

The right-hand drive-only BLS is built at the GM plant in Trollhattan, Sweden alongside the Saab 9-3 and will be available in Europe and Mexico, but not in North America.

It will be the first Cadillac to have a diesel engine, a 1.9-litre unit that is also used in Saab, Alfa Romeo and Vauxhall models.

Cadillac hopes its introduction will help to more than double sales in Europe to 10,000 units this year and Wade believes that the fact the car has been developed for Europe shows how seriously Cadillac views the market.

“Our heritage is in luxury cars and we are a well recognized brand. That’s why we think it will take us less time to grow in Europe, even though we accept that our sales will be mainly conquest,” he says.

According to Cadillac, the BLS will enlarge the brand’s market potential by 3.8 times in the UK, while the business user market is a key target area.

“I think people want a change, but there needs to be a creditable alternative. With the BLS I believe we will be able to find people willing to stand apart and be different,” adds Wade. 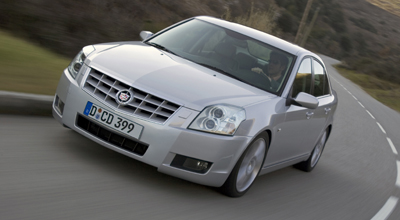