Turnaround puts Clark in the black

Was this article useful?
Click the thumbs up >
One year ago, the headlines were all about “accounting breakdowns” and “audit failures”.

Auditor KPMG pointed the finger at one employee who had not claimed back VAT for nine months.

Chairman John Clark, who set up the Aberdeen-based business in 1977, also puts the blame on huge investment in facilities and exceptional losses at his Land Rover dealership for exacerbating the 2003 deficit.

Buoyed by new product from BMW (Clark’s son Chris is 1-series product manager) and Audi, the 2005 accounts show a £1m profit after exceptionals on turnover of £170m. Just one site – Volkswagen – is not in profit, but a push on higher margin used cars should remedy that this year.

It’s a significant turnaround, although the group still has debts totalling £12.1m. It comes during a sustained period of reinvestment, which will see a new £4m site open in June for the Audi dealership in Aberdeen, Mini move into a separate showroom in the city next year and the Dundee bodyshop relocate into new premises.

After 2003, few people would’ve been surprised if Clark had called a halt to investment and slipped into the background to regroup. That’s not his style, however. Although he doesn’t court publicity, Clark has a salesman’s gift of the gab and an ability to spin everything in a positive light.

His straight-talking honesty – “I’m not the best politician in the world!” - is refreshing, though many of his most revealing comments about the state of the motor industry come when the notepad is tucked safely away. 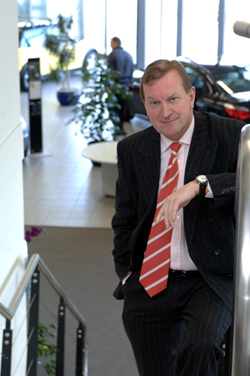 “Is it right or wrong for us to be doing so much investment when the market is down and margins tight? It’s our choice to put the business in a position where we want to go,” Clark says. “We need the space and the facilities to compete with the competition.”

Last month he completed the buyout of investment firm 3i’s 25% share of the business, bringing John Clark back into full family ownership. That move gives him the control to make changes he believes are necessary to safeguard the group’s future. Some sites will be sold and leased back to raise capital. “The most successful dealer groups have a mix of owned and rented sites,” Clark adds.

The structure is already quite complex with individual holding companies handling each dealership. But the emphasis is on autonomy with dealer principals having total control of their dealership.

John Clark’s focus on premium brands has given it a certain immunity from Scotland’s omnipresent Arnold Clark Automobiles, which enjoys bulk buying privileges thanks to its size. But bulk buying is starting to affect premium brands and Clark is critical of those carmakers that are now allowing leasing companies and large retail groups to buy cars at better terms, particularly as margins are so tight.

“If the large groups tweak the tail of the manufacturer for 1-2% then that puts everyone on an unlevel playing field,” he says. “It’s been happening in the mainstream for a while and it is now starting to happen in our segment with some fleet deals. The DTI is lax on checking pre-register deals.”

Clark also accuses a few carmakers of signing off huge discounts for internet operators who claim they are leasing companies. “They don’t check it out properly and they give them higher discounts on car deals,” he adds.

“I can’t remember there being so many battles with the manufacturers as there are right now. Many are opposed to what we are trying to do when we are all trying to achieve the same things. And why shouldn’t dealers make a good return if they do the job right?”

Aberdeen has a unique set of advantages and disadvantages for car retailers. The retail market is higher than the national average, for instance, which helps customer loyalty, while drivers travel huge distances between towns, which means more regular servicing.

But it’s the oil industry which has the biggest impact on the Aberdeen economy. Local business relies on it for consumer confidence, but for car retailers a strong oil sector is a mixed blessing. “We compete for staff,” says Clark. “We have pay plans that are above the norm to retain technicians. We have to balance it up, but when the oil industry is weak there are real problems for the economy.”

John Clark pays a higher basic wage with a bonus based on performance. The longer staff stay at the business, the more holidays they receive and the higher the bonus opportunity. Apprentices get at least £5 per hour in the first year, £6 in the second and £7 in the final year. They also get their tools provided by the company.

Put into context, on the oil rigs people can earn £50,000, but they spend a lot of time off-shore.

Those looking to settle down are an important employment pool for John Clark, which faces competition from the likes of Town & County, Arnold Clark and Pendragon (via the recently acquired Reg Vardy business) in the city.

“We’ve also taken some Polish staff – we have three already with another five due to start,” says Clark.

His three bodyshops have started operating two nine-hour shifts, enabling the operations to open for 18 hours. Clark is about to initiate a similar structure into the BMW showrooms for PDI and used car preparation work in an attempt to bring down lead times and squeeze greater efficiencies from his fixed assets. A night shift will extend the current 8am-7pm opening hours to midnight and is likely to be introduced into the other dealerships.

The revised structure will help the group to boost funds and reduce borrowings. It will also enable Clark to better contain overhead costs. Combined with a drive to maximize profit potential from sales, service/repair and accident repairs, he is targeting 2.2% return on sales this year.

“We have the right management structure and a strong mix of franchises for our area. Now it’s down to getting more out of what we have,” says Clark.

John Clark (Holdings) is heavily geared, according to one industry analyst. He pointed to £12.1m of debt and £3.1m shareholder funds, while the group has £9m in fixed assets, £7m in property of which £5m is long leasehold.

“They must have very understanding bankers since the debt is not covered by assets by the looks of things,” he says.

“They have returned to profit, although they must be having to work pretty hard for it. BMW and Audi should be good but are hard work at the moment – BMW’s investment demands are heavy, which must be stretching them given the amount of existing debt. VW is difficult to make a profit with at the moment.”

The analyst also highlighted the chairman’s statement in the latest annual report, which says the group plans to reduce debt through property deals.

“Is this sale and leaseback of their freeholds?” he asks. “It puts the future at risk if you have no freehold base at all.

“Some of the debt is obviously financing the past losses. They have quite a hard pull ahead of them so, to quote the chairman, it’s a good thing they are in it for the ‘medium to long term’.”

John Clark entered the motor industry at the age of 17 as a management trainee with Ford. After a spell with a Ford dealership, he realized his desire to run his own business when – in partnership with a friend – he set up Lothian Sports Cars.

From a one-room operation trading in high-performance second-hand cars, the company grew to become the Edinburgh agency for Scimitar, Lotus and Aston Martin.

The potential for exotic cars in the expanding oil-fuelled economy of Aberdeen persuaded Clark to look north. Lothian Sports Cars opened an Aberdeen branch, gaining the BMW dealership for the Grampian Region in 1975.

Recognizing the potential for BMW, Clark realized that it needed full commitment to develop. The Aberdeen operation was bought out, the Scimitar and Lotus dealerships relinquished and, in 1977, the new John Clark Motor Group was formed. It now has 11 dealerships, operating 15 franchises and three bodyshops spread from Edinburgh to Aberdeen.

Clark is a keen sportsman, with a particular interest in motorsport, having competed first in rallies and then in circuit racing with Sports 2000 and saloon cars. He drove and then became a team manager in the prestigious British Touring Car Championship. Clark still competes in classic car races around Europe.