Was this article useful?
Click the thumbs up >
Most of the media is unanimous: UK car buyers are responding to rising fuel prices by buying smaller, more economical cars.

It makes perfect sense; with fuel at more than £1 per litre, what else would you expect? Except it is complete nonsense. UK buyers are responding with a very British bloody-mindedness and buying more powerful cars.

Claims have been made that sales of small cars have been increasing, showing how economy-conscious we are becoming. It shows nothing of the sort. It shows – and so-called ‘industry experts’ should be aware of this – that there is a lot of new product in the city car sector which will boost sales this year and next.

Even if fuel dropped by 20p per litre tomorrow, sales would keep on rising: the link between city car sales and fuel prices is an entirely spurious correlation. In fact, the market share of superminis, which account for the majority of small car sales, has actually dropped so far this year.

As if to prove how little fuel prices are affecting our buying patterns, those ‘gas-guzzling’ SUVs are now setting sales records.

Penetration in the first quarter of 2006 was 7.8%, compared to 7.6% for 2006. In March, market share exceeded 8% for the first time. And what is the best performing model in terms of sales growth? The Range Rover Sport – about as anti-green a statement it is possible to make.

In the long-term, buying patterns may change as a result of rising fuel prices. However, Britain has had higher fuel prices than most of Europe for many years and has also had a larger proportion of large cars.

Thanks to the effect of our big company car market, we seem happy to take the extra fuel consumption on the chin. Besides, with the rise in diesel sales, we can often buy a new, larger car and still save fuel.

As if to prove the point, one of the best performing segments so far this year has been executive, which has risen by 8.7% after years of stagnation. All three of the big players (Audi, BMW and Mercedes) have seen sales rise.

The executive segment is one of the first places that would lose sales in any downsizing trend – a 5-series driver can always trade down to a 3-series, so any rise here takes a lot of explaining away by an advocate of downsizing.

It may still happen – indeed it almost certainly will to some degree – but to claim we have already changed our buying habits is to come up with theory and then beat the facts into the required shape. 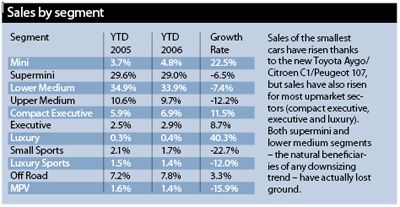