Was this article useful?
Click the thumbs up >
April new car registrations are down by 9.1% to 163,216, following a strong March.

Diesel new car registrations also suffered a dip of 6.6%, despite the market rising to 37.1%. “March was a better than expected new car market, which has not followed through into April,” said Christopher Macgowan, Society of Motor Manufacturers and Traders chief executive. “Consumer confidence has suffered across all sectors of the economy in recent months, and new car buyers may well have been affected by increasing household costs, and the breaching of petrol's £1/litre barrier in some areas. Perhaps it is not surprising that eight out of the top 10 best sellers fall into the supermini and lower medium segments.” 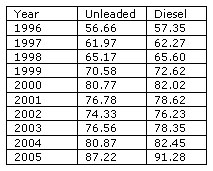 Vauxhall edged ahead of Ford in the month, with a 15.4% share of the April market, compared with Ford's 13.5%. However, Ford remained the UK's best seller over the first four months of 2006.

The Ford Focus retained the top spot in April, although the Vauxhall Astra closed the gap significantly. Vauxhall's Zafira also made an appearance inside the top 10 for the first time since February 2005. 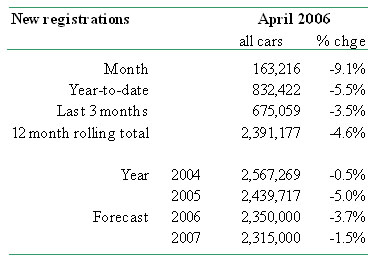 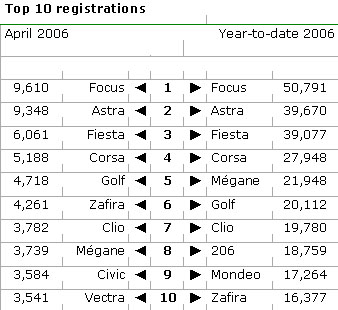