Was this article useful?
Click the thumbs up >
Nissan has teamed up with Breakthrough Breast Cancer to mark the 10th anniversary of the charity’s flagship campaign ‘Fashion Targets Breast Cancer’, by giving away a customized gold Micra C+C.

In addition to the standard equipment including electric windows, air conditioning and a subtle body-kit modelled on the Micra 160SR, Frost added 17-inch alloys and purple leather sport seats with gold trim.

Frost also replaced the standard six speaker CD radio with an entertainment unit by Alpine Electronics, which plays CDs, DVDs and MP3s and has a satellite navigation system too.

Nissan is offering the car in a fundraising competition for Breakthrough Breast Cancer. Frost will be taking it on a tour of the country where it will feature as the centrepiece in a series of fashion shows in shopping centres. Shoppers will be able to enter the competition to win the Micra C+C while making a donation to the charity’s campaign.

The tour started on Saturday at the Queens Arcade in Cardiff and will move on to Manchester, London (Lakeside), Newcastle, Birmingham and then Glasgow. 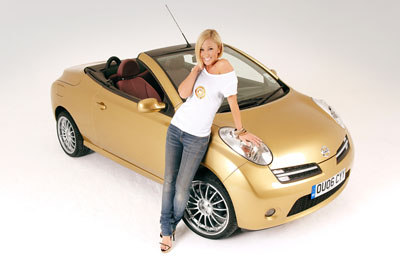 AM Poll
What is your take on the car retail sector's ongoing vehicle supply shortages? Please leave a comment
Vote
View all
3387