Was this article useful?
Click the thumbs up >
This handsome saloon is Mercedes’ new C-class. Due for launch in spring 2007, the four-door is another mini-S-class.

The geometric lamps, wide grille, chiselled character line down the flanks and sculptured boot are all influenced by Merc’s new flagship.

Inside, there are S-class touches, too. Its chrome rotary dial to control key functions appears, and luxurious seats that cool, massage and grip your sides depending on circumstances.

The sat-nav pops up from the dashboard, materials are much improved and there’s a wee bit more space, too, thanks to a slight increase in wheelbase and track.

The C-class gets a new rear-drive chassis, which will share components with the 2009 new E-class. However, its costly gizmos such as roll reducing Active Body Control and air suspension won’t figure.

Four, six or eight cylinders, petrol or diesel – a broad engine line up will cater for all tastes. The 180bhp supercharged 1.8 powers base models, the new petrol V6s man the mid-range and the AMG flagship will run the new 6.3-litre V8 with around 500bhp.

Diesels are the 2.2-litre four, and 3.0-litre V6 with 187 and 221bhp. The transmission choices are six-speed manual and seven-speed automatic.

The C-class family will naturally encompass more than the four-door. The sleek estate follows in autumn 2007, with the CLK coupé and cabriolet following in 2008. But two other proposed models – a four-door coupé like the CLS and a shooting brake version of the SLK – are currently on ice. 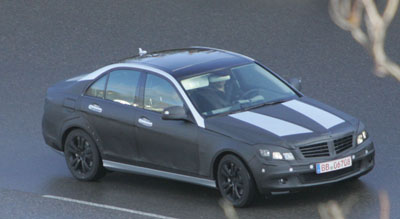 Engines
Fourpot and V6 petrol and diesels, plus the spanking new 6.3-litre V8 for flagship AMG