Was this article useful?
Click the thumbs up >
Lex has produced its first top 10 performers in RV terms in three price sectors. The results show that style, individuality and build quality are now the key factors in making a car perform when it hits the used market.

Using a typical three year/20,000 mile per annum contract, the vehicle management firm looked at the cars which it believes will be the most attractive used car proposition across three price sectors – under £15,000, £15,000-£30,000 and £30,000-plus. German and Japanese brands dominate, representing 25 of the 30 vehicles listed. 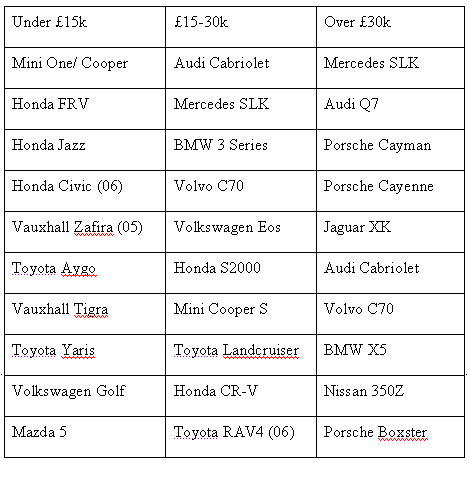 Jon Walden, managing director of Lex, which runs a fleet of 180,000 vehicles, said, “More than ever before, company car drivers are taking the opportunity to go for a car which suits their lifestyle. This means a varied group of cars enter the used market three years down the road, and buyers find them equally appealing and are willing to pay good money for them. Stronger residual values mean less depreciation, and lower monthly costs, a rule that applies to private buyers just as much as company car drivers.

“Previously we’ve produced just one residual top 10 list, and when you don’t analyse individual sectors, the upmarket cars tend to dominate – as we saw in 2005 when all the top ten places were taken by aspirational German models.”

“By looking at the top ten performers in three individual price sectors we can see much more accurately which are the ‘wise buys’ for all budgets. German cars are still strong, but Japanese, English and Swedish manufacturers are also now well represented.”