Was this article useful?
Click the thumbs up >
This may look like an A4 that’s been through the hands of a careless bodyshop, but it’s actually a hugely significant prototype.

Under the ill-fitting skin is Audi’s MLB platform, a modular chassis that will underpin the next generation of saloons. Models certain to use it are the next A4, A6 and an unfamiliar model – the A5.

The A5 is a coupé to take on Mercedes’ CLK. It will be available as both a coupé and a convertible (replacing today’s A4 cabrio). The A5 coupé, which closely resembles the 2003 Nuvolari show car, will be the model that introduces the MLB chassis in mid-2007.

There are big changes afoot, as Audi tries to up its game dynamically. By relocating the clutch and differential, Audi has managed to shunt the engine further back in the nose. As a result, the front overhang is shorter, which should sharpen turn in. There’s a quicker steering rack promising more feel, and the suspension has been redesigned to improve ride and handling.

The prototype has a 2.8m-long wheelbase, which suggests there should be decent room inside, even for the two-door A5. 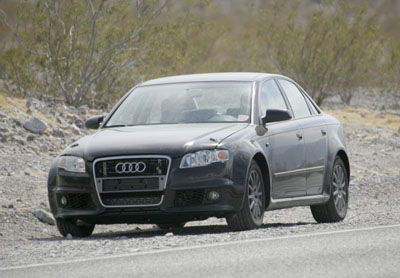 Chassis
An all-new front- and four-wheel drive chassis with new suspension and steering.

Design
First car on new platform will be the two-door A5 coupé.