Was this article useful?
Click the thumbs up >
Seat has been criticised by European crash safety experts for removing the seatbelt reminder alarm as standard specification in the Leon.

The Leon was awarded four stars for adult occupant protection in November 2005 when the seatbelt reminder was standard equipment.

Euro NCAP chairman Claes Tingvall said: "This is the first case we’re aware of where a manufacturer has removed safety equipment from a vehicle after it has been assessed by Euro NCAP. It is very disappointing.

"Seatbelt reminders are an effective way to encourage people to buckle up. By removing the reminder from the León, Seat has taken a step backwards in terms of safety, just when manufacturers like Opel and Ford have shown what can be done. We would like to see Seat put safety ahead of economic considerations."

Two new cars – the Ford S-MAX and the Vauxhall Corsa – are been awarded Euro NCAP’s maximum five stars for adult occupant protection. The S-MAX becomes the highest-scoring MPV to date.

'I am very pleased to see Ford and Vauxhall achieve such good results with these new cars. The S-MAX now sets the standards for other MPV’s to follow while the Corsa is another high-performing supermini. It shows that safety is high on the agenda for responsible car-makers and Euro NCAP is pleased to be able to give them recognition for their efforts,' Tingvall said.

The S-MAX also scores well for child safety and is awarded a four-star rating in that category. The Corsa’s three-star pedestrian protection rating shows that some manufacturers are increasingly turning their attention to other road users, although the S-MAX is awarded a disappointing two stars in that category. 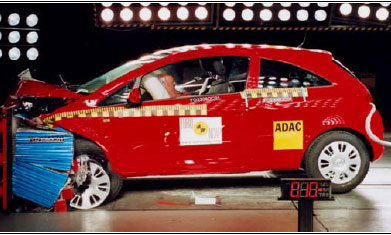