Was this article useful?
Click the thumbs up >
A 16-year old Daihatsu Charade bought for £150 on e-Bay has just completed one of the toughest drives in the world, the 6,635 mile-long Mongol Rally.

Furthermore, the car looks set to be the only entry to complete the rally without a single breakdown.

David Mayo, a 21 year-old student from Surrey, took 20 days to complete the fund-raising feat with his 55-year old father, Tony.

Despite departing Hyde Park on July 22, many of the 160-plus entrants have still to arrive in the Mongolian capital, Ulaanbaatar.

He said: ‘The little car was amazing and although it wasn’t a race, we were actually fifth to arrive. The conditions were so atrocious that at one stage a Mini disappeared down a pothole.

‘The toughest part was driving through Kazakhstan, south of Russia. That took two full days of driving to cover 50 km. The engine didn’t like the 80 octane fuel we had to run on and the suspension took a hammering over the crater-sized potholes but the Charade struggled on nonetheless.’

Neither Mayo nor his father have any mechanical knowledge but wanted an old Japanese car because they believed it would be reliable. Competition rules limit the engine size to below 1.0 litre and while there is no cost limit, cars must be considered ‘highly unsuitable’ for the trip.

Apart from raising more than £1,000 for charity even before they left Hyde Park, on arrival in Ulaanbaatar the Mayos donated the car plus toys and camping gear for auction. The proceeds will go to a children’s charity.

The official UK importer, Daihatsu Vehicle Distributors, made a contribution to preparation costs and dealer, Hall’s of Ruddington carried out all the necessary work.

Daihatsu managing director, Paul Tunnicliffe, said: "This remarkable adventure really captured my imagination and although there was clearly no guarantee of success, it seemed a worthwhile cause to support. It is also a reflection not only on the durability of Daihatsu cars but the professionalism and thoroughness of our dealers." 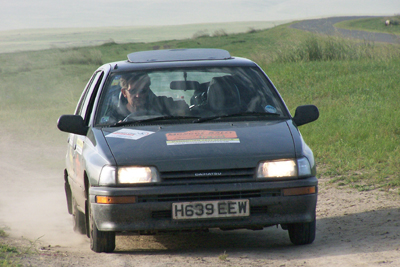