Twentieth bodyshop for Fix Auto in the UK

Was this article useful?
Click the thumbs up >
Fix Auto, the Canadian-born accident repair franchise, has recruited its 20th bodyshop into its growing UK network.

John Matthews, Fix Auto UK business manager, says he’s pleased with the progress achieved since the concept was introduced to the UK in October 2004. “We’re now the second biggest network of independent body repairers in the UK after Nationwide,” says Matthews.

“From North Yorkshire down to Petersfield, and Cardiff across to Dagenham, we’ve got a fairly evenly spread mixture of bodyshops in the network. Our goal for the end of the year is to have 30, and we’re on track for that, and by 2007 we want 45 to 50 bodyshops on board.”

Although members currently pay Fix Auto around 1.5% of turnover for the franchise, Matthews says the company does not promise immediate repair volumes. “This is for the long haul, because we can’t change insurer’s practices overnight,” he says. “They have to have vision to know that this is an opening for them. In 18 months to two years they will be getting a return on their investment.”

Fix Auto’s proposition includes marketing directly to consumers and reducing the need for insurers to manage their own repair networks.

Despite ongoing talks with insurers and work providers, no franchise-wide contract for work has yet been secured. However, Matthews says he is pleased that eight of the Fix Auto outlets were successful in winning contracts with Fortis Insurance earlier this year, and he’s working on expanding the contract out to all sites.

A trial is underway for another insurer, which Matthews cannot name because of a confidentiality clause. Discussions with other insurers are continuing.

“It’s a steady, consistent approach. But to be two years down the line with one insurer contract and 20 bodyshops is a real achievement,” he adds. 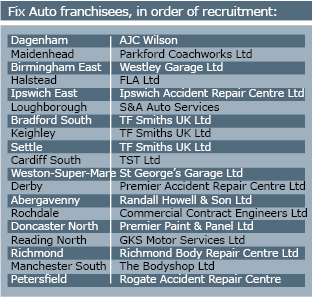