Research by Trend Tracker, based on the analysis of 147,700 UK insurance authorised bodyshop repairers in 2005, shows this has been due to the reduction in the cost of parts used in accident repairs. In 2003 this amounted to £702 for an average insurance repair but fell by 16% to £592 in 2005.

Parts costs now account for 45.2% of the cost of insurance accident damage repairs compared with 49.4% in 2003. This has occurred largely as vehicle manufacturers have reduced the cost of the most commonly fitted parts used in accident repairs as a result of the 2002 Block Exemption Regulation which introduced more competition for the car manufacturers’ original equipment (OE) replacement parts.

Lower repair costs combined with a falling claims rate is good news for car owners and consumers generally as it will allow insurance companies to reduce the cost of insurance premiums. For the car manufacturers, falling repair costs result in lower insurance group ratings and lower insurance premiums for the customers that buy their cars, but replacement parts are also one the largest areas of profitability for car manufacturers so falling parts prices and falling repair volumes mean that the profit contribution from parts will also potentially decline.

Although repair costs averaged £1,310 in 2005, Trend Tracker says there is a 66% difference in average repair costs between the different vehicle makes ranging from £1,786 for Jaguar to £1,073 for Proton.

The principal reason for these brands’ high repair costs is the higher cost of replacement parts which, with the exception of Mercedes-Benz where labour accounts for a high proportion of repair costs, parts account for over 50% of these makes average repair costs.

Looking forward to the future of car body repair where the number of bodyshops have already declined by 31% over the last decade to 4,560 outlets due to falling levels of net profitability, Trend Tracker’s ‘mfbi: The Car Body Repair Market in the UK’ report says that to be more profitable, bodyshops need to specialise either in certain categories of repair or on specific vehicle makes where repair gross profits are higher. 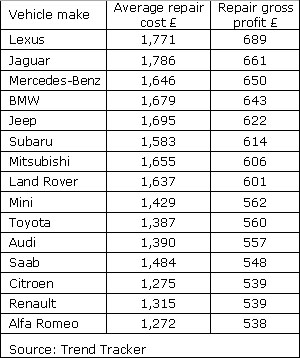