Was this article useful?
Click the thumbs up >
New car sales have dropped by 6.1% in August to 77,961 units compared to the same period last year.

"However, although fuel prices have fallen recently, the outlook is still clouded by economic uncertainty and the effect this has on consumer confidence. Despite a subdued market, September is still key. A host of manufacturer-led deals mean there will be plenty of opportunities for motorists to do a deal on the forecourt," said Macgowan.

The current SMMT forecast for September registrations is now 395,000 cars. This would be a 5.3% decline on September 2005 but would still generate an estimated £6 billion of business and represent the second largest market of the year, behind March.

"The twice-yearly plate change means that August is now the new July as the market gears up for the rush for new registrations," said Sue Robinson, director of the RMI National Franchised Dealers Association (NFDA).

"As the summer holiday season draws to a close, dealers are looking forward to a solid September on the back of the British Motor Show and the raft of new models, particularly in the small to medium segment, that are expected to be popular in showrooms." 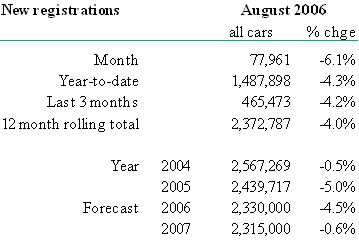 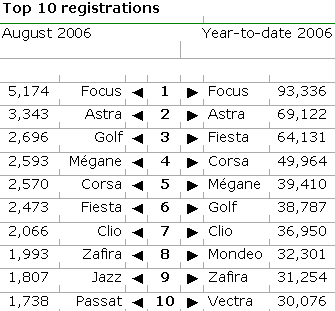