Spyshot: VW Tiguan: a tiger crossed with an iguana

Was this article useful?
Click the thumbs up >
Volkswagen’s Rav4 and Freelander rival will be called Tiguan – and here it is undergoing hot weather tests. The oddball name is a combination of tiger and iguana.

The front and rear ends may be disguised, but VW gave a sneak peek at the design details with this year’s Concept-A. While the Geneva show car had a canvas roof and suicide doors, the production car is far more conventional.

The Tiguan shares components with the Golf, and will be built on the family hatch’s production line in Wolfsburg. The base car – which runs the 1.4-litre, cranking out 150bhp thanks to a turbo and supercharger – is front-wheel drive. All other versions have part-time 4Motion four-wheel drive. A Haldex clutch shifts power between the axles, depending on grip levels.

Four 2.0-litre petrol and diesels will be offered, alongside the 1.4 TSI. Transmission is via a six-speed manual, or double clutch DSG automatic.

The Tiguan measures 4,430mm-long, 1,800mm wide and stands 1,670mm tall. Thanks to its car-like monocoque chassis, it weighs 1546kg – fractionally less than the competition. Foregoing off-road kit like low-range gears helps keep the bulk down.

The cargo bay holds 510 litres and with its 2,600mm-wheelbase, the car should have plenty of cabin space. 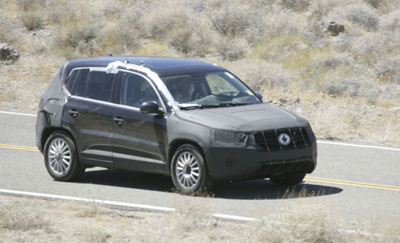 Design
Concept-A had Tiguan’s funky headlamps and grille, but body is taller with four conventional doors.

Drivetrain
Base Tiguan is front-wheel drive, but other variants employ 4Motion four-wheelrive