Spyshot: Letting the Cat’s XJ out of the bag

Was this article useful?
Click the thumbs up >
Modernizing Jaguar design is the top priority for 2007.

The XF show car, unveiled in Detroit this week, previews Jaguar’s bold new style for the S-type replacement. And the XJ saloon is also getting cosmetic surgery to spice up its conservative looks.

Insiders admit that the 2003 XJ’s design was too evolutionary, and failing to make the car sufficiently different from its predecessor failed to bring in the new blood its abilities merited. This year’s facelift aims to address that. A little.

Most obvious will be an enlarged, lozenge-shaped grille, similar to Audi’s single frame approach. This is inspired by the XF concept’s, as is the new front bumper with twin, aggressive vents. The gill behind the front wheelarch is also spreading from the XK to other Jags. The XJ’s rear bumper and boot are also reprofiled.

With its superb ride and sharp handling, not much needs changing under the skin. Indeed, there won’t even be any powertrain tweaks. So the latest version of the supercharged 4.2-litre V8, which Jag has boosted from 400 to 420bhp for the XKR, is overlooked. And the other engines – 2.7-litre twin turbo V6 diesel, 3.0 V6 petrol and naturally aspirated 4.2 V8 – are carried over.

Sadly, there won’t be an appearance from the sensational 3.6-litre V8 diesel as seen in Jaguar’s Range Rover stablemates, either.

The revised XJ takes a bow at March’s Geneva show, and appears in showrooms in the summer. 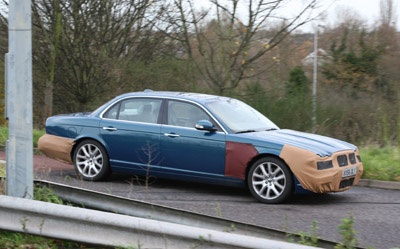 In the nose
It’s business as usual, with existing engines carried over