Was this article useful?
Click the thumbs up >
Here’s the proof that Ford is following up its slinky Verve concept car with a new, more stylish supermini. The Fiesta will be replaced next year by this new three- and five-door hatchback.

Although heavily disguised under that black cladding, the window lines and other details suggest that the production car will follow the outline shape of the concept car unveiled at the Frankfurt Motor Show. It’s unclear at this stage if the Fiesta moniker will continue, but Ford is known to be exploring new names.

Powering the new Fiesta are a range of engines stretching from a lowly 1.2 litres up to 1.6, and we’re expecting some to be offered with turbo power. A high-performance ST model is a given.

Those of a green persuasion will be able to pick an ECOnetic model, tuned for parsimony and with aero aids to help them cut the air.

The Blue Oval owns a hefty chunk of Mazda and the two companies’ superminis will share much componentry to reduce costs. Expect the Fiesta replacement and 2 to have around 60% commonality.

This suggests that Ford’s new baby could be usefully lighter than its predecessor; the new Mazda2 weighs 100kg less – to the benefit of performance, economy and handling. 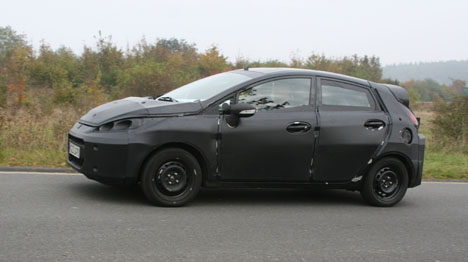 When: Another Fiesta concept is due in spring 2008, production car next autumn