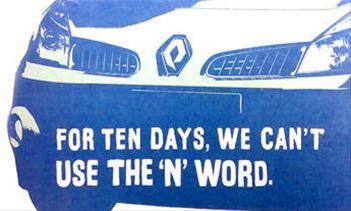 Renault has, reportedly, withdrawn an ad over fears that its use of the term "the N-word" could cause offence.

The car manufacturer decided to withdraw the ad after the Advertising Standards Authority received two complaints from members of the public who felt that the term carried racist connotations.

Even though the ASA decided not to investigate the ad, which appeared in newspapers, Renault chose to withdraw it.

The print ad was to promote a limited period during which Renault dealers promised not to use the word "no" to customers.

A Renault spokesman said: "Any misunderstanding of the N-word is totally unintentional. However, this specific print advertisement will be removed with immediate effect, so as not to cause any offence.

"The latest press and radio ad campaign from Renault UK has been created with a simple game of 'Yes/No' as its theme," the spokesman added.

"The N-word headline is one of three print advertisements that are complemented by three radio commercials explaining the game and Renault's offers."

The two other print ads in the series, which was created by the advertising agency Publicis, do not mention the "N-word".

A spokesman for the ASA said: "We have received two complaints that it was offensive and inappropriate because of the connotations of the N-word.

"It was decided that there was not grounds for an investigation, so we won't be going to look into it any further.

"We genuinely believed that the tone of the advert was not aggressive or insulting. It was set within the context of a motoring ad and readers were unlikely to draw the correlation between that and racist terminology."