Hot Clio priced above the competition

Was this article useful?
Click the thumbs up >
Renault's new Clio Renaultsport 197 Cup will be priced from £14,995 when it goes on sale in the UK next month.

The new stripped down 197 Cup's interior dashboard and centre console has been taken from Renault’s entry-level Clio Extreme model, whilst some items of equipment, which come as standard on the Clio Renaultsport 197, air conditioning and curtain airbags have been moved to the options list for the Cup version, priced at £525 and £200 respectively.

The two other options available for the Clio Renaultsport 197 Cup are Renault 17-inch Speedline alloy wheels in satin black at £175 and Renaultsport Recaro seats at £850.

Other equipment like cruise control, speed limiter and electric door mirrors, have been removed entirely or replaced. For example, the Renault hands free keycard with steering wheel height and reach adjustment. The Cup has a standard key with remote-control door locking. The steering wheel has height adjustment only.

The Cup is only available in three colours. Non-metallic racing blue is standard, while metallic nimbus (grey) is a £360 option and non-metallic white paint is an extra £150. 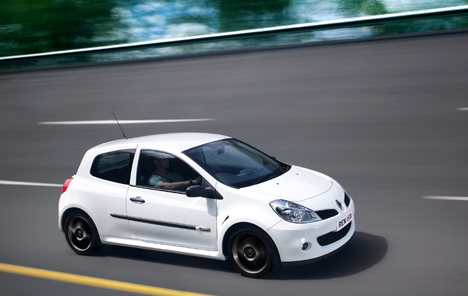 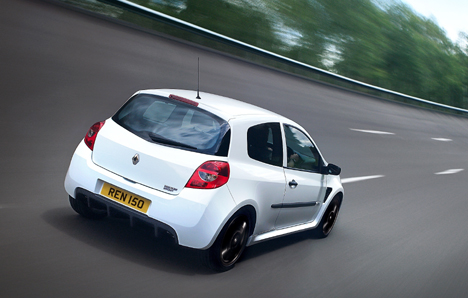