Was this article useful?
Click the thumbs up >
EuroNCAP has revealed its latest crash test results, with four of the six new models achieving the full five stars for adult occupant protection.

Two of the models, the Mazda2 and Volvo V70 were criticised in earlier tests for delayed airbag deployment. However, both have since had the faults rectified, receiving five star adult occupant protection and four star child occupant protection ratings.

In the large family car segment, the Renault Laguna and Mercedes C-Class were also awarded the highest ranking for adult occupants.

But the Renault outperformed the Mercedes on child occupant protection, scoring four stars against the C-Class’s three.

The Honda Civic and Daihatsu Materia scored four stars out of five for adult occupant protection, each losing a star for potentially damaging dashboard structures.

However, the Honda fared for pedestrian protection, scoring three stars out of a possible four, wheras the other five cars scored just two each. 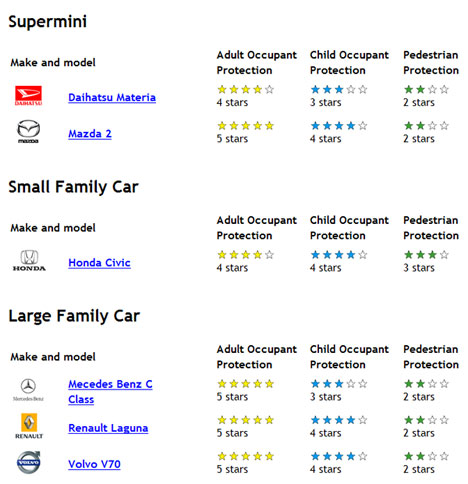