Was this article useful?
Click the thumbs up >
The new Mondeo will feature the most hi-tech driver technology ever seen in a car from Ford as the manufacturer attempts to take its vital upper-medium model upmarket.

When it goes on sale in June, the new Mondeo will be available with a development of the Human Machine Interface (HMI) system first seen on its sister cars – the S-Max and Galaxy people carriers. 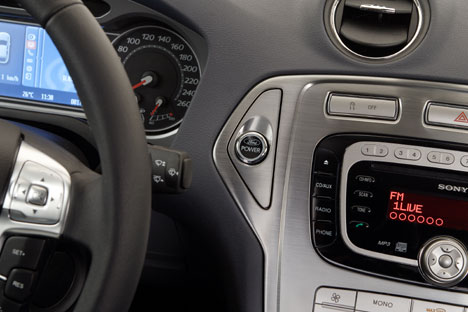 However, the Mondeo’s HMI system, called Convers+, features a colour-screen display between the rev counter and speedo, and a joystick control on the steering wheel.

Standard on top-spec Titanium X models and an optional extra across the rest of the range, Convers+ allows drivers to control functions such as the mobile phone, stereo and air conditioning, again using a joystick control on the steering wheel.

Stefan Becker, a technical specialist at Ford of Europe, said: "Premium brands have done something very interesting with these types of systems, such as Audi with MMI and BMW with iDrive.

"The concept electronics are part of their identities. Historically at Ford there has been no common appearance or consistency until now.

"Our mission was to make something ‘ingeniously simple’. We decided not to invent a new method of operation but to use one well known to everyone – the method used in 95% of mobile telephones."

Consequently, the whole system is controlled with a directional joystick and an enter button, or via the colour touchscreen in the centre console.

Convers+ incorporates a Bluetooth phone system and also imports the ringtone of your mobile into the car, and in the future there may be a system which will read out received text messages.