Year-to-date registrations are also up by 3.1% to 858,639 units, according to the latest figures from the Society of Motor Manufacturers and Traders.

“Dealers will be delighted to see sales up on last year, although as April 2006 was an unusually quiet month for car sales, the increase is not as dramatic as it may appear,” she added.

Robinson said dealers should remain cautious about the prospects for 2007 and to wait to see the impact on sales of the interest rate rises which are predicted to come into place next week.

Whilse the Ford Focus remained the top selling model in the UK in April and over the year-to-date, it was the supermini market that showed the best growth in the month.

Diesel car registrations rose for the third time this year and growth was again more than double the market average. Diesel penetration in April rose from 37.1% last year to 39% in 2007. Ford's Focus remained the best selling diesel model.

Diesel registrations have risen by 25,107 units over the first four months of the year and the full year forecast has been raised, with diesel penetration expected to average 40% over 2007. 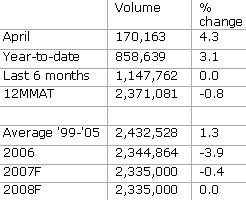 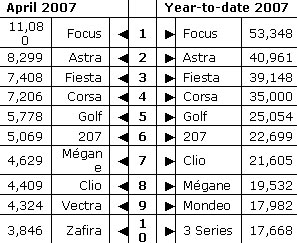