BEN takes to the waves

Was this article useful?
Click the thumbs up >
BEN, the automotive industry charity, will be making its debut in the ‘Rolex Fastnet Yacht Race’.

The 608 mile race starts on August 12 and BEN has teamed up with BDM, the development and marketing company, to help them complete it.

The entry was arranged by Mike Surridge, managing director of BDM, who is also a commercially qualified skipper.

By entering this event the crew of eight guests and two core crew members will have raised £9,500 for BEN.

Charles Davis, who recently joined BEN as director of fundraising and communications, said: “What struck me the most about this initiative is the huge amount of effort that each member has put behind raising sponsorship funds.

“Activities have ranged from baking cakes and selling them to colleagues, to ‘in-house auctions’, to charity balls, to a manager at the AA putting the use of their Audi TT for the weekend up for the highest bidder.

"However, I think the most bold and unusual initiative is that the AA’s information systems director, Trevor Didcock, has offered to cook dinner for the highest bidder in the comfort of his own home.”

Charles Davis went on to to thank Mike Surridge, in particular, for his efforts in bringing the yachting event together.

“I would also like to thank all those who have put so much effort into raising the funds including NGK, Peugeot finance and the AA are represented by five of the eight sponsored crew,” he added. 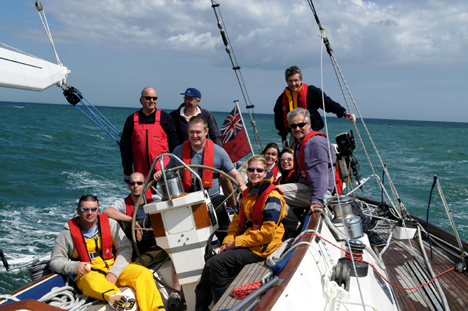 The BDM-BEN team is made up of the following individuals: