Was this article useful?
Click the thumbs up >
The London Group, with a Lotus outlet in Park Lane, is the first dealer appointed by Lifestyle Automotive to sell French PGO Automobile sports cars in the UK.

It has sold its first car and is arranging test drives following the models’ UK debut at the London Canary Wharf Motorexpo. Final right-hand drive assembly takes place at Lifestyle Automotive’s centre near Stroud in Gloucestershire.

Bob Barris, director of Lifestyle, expects to have eight dealers selling PGO Cévennes (priced from £28,899) and Speedster IIs (from £29,999) by year end.

Both models have composite bodies, and performance is said to match that of more expensive carmakers such as Porsche. Their drivetrain is built by PSA Peugeot Citroën, which collaborates on design.

Two more dealers will be appointed by next spring.

Lifestyle Automotive, which has no connection with the Lifestyle Europe dealer group, also imports Lobini sports cars from Brazil. The H1 model is due to be available in right-hand drive by late this year.

Barris says: “We are sure there is a demand in the UK for small-volume, exclusive sports cars.”

Lifestyle Automotive expects to sell 50 PGO cars this year and 150 in 2008. PGO will produce only 350 units in 2007 but output is set to rise after a move to a new plant in 2008 following investment by the Al Sayer Group of Kuwait.

PGO Automobiles takes its name from Prévoit, Giles and Olivier, car enthusiasts who founded the company in the Alsace 20 years ago. 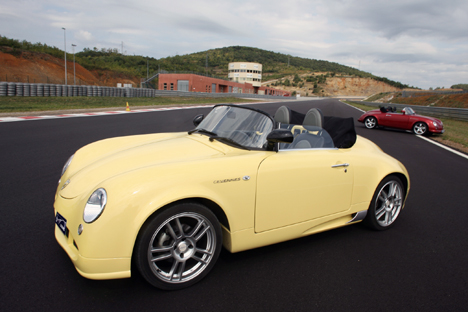