Year-to-date registrations were 2% up to 1,267,299 units compared to the same period last year.

The Bank of England also announced that interest rates would be increased by 0.25% to 5.75%.

“At the half point of the year, June is traditionally the time to take stock of one's performance – and so far in 2007, things look encouraging,” said Christopher Macgowan, chief executive of SMMT.

“However, while total new car registrations for the first six months are up on the previous year, they are still below the average since we moved to the twice-yearly plate change. Cost-conscious motorists will surely have one eye on the showroom and the other on the Bank of England's rate announcement due later today.”

“Car buyers have weathered 2007’s multiple interest rate rises very well, if June’s car sales figures are anything to go by, but consumer confidence can only take so much," said Sue Robinson, director of the RMI National Franchised Dealers Association (NFDA), part of the Retail Motor Industry Federation (RMIF).

Most segments posted growth in June. Over the first half of the year the supermini market has shown the best volume gain, up by 20,763 units or 5.3%.

The diesel-engined registrations only edged upwards in June and their market share slipped marginally from 38.9% in June last year to 38.4%.

The Focus remains the best selling diesel model over the first half of the year, but BMW's 3-series took the top spot in June. 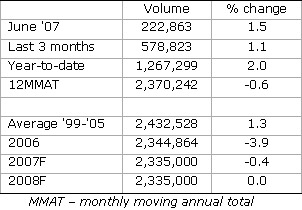 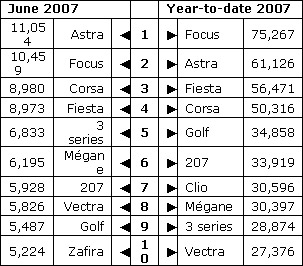