Was this article useful?
Click the thumbs up >
Renault will launch its first bioethanol car into the UK at the end of this year with its Mégane E85 hatchback.

The new model has been developed in line with Renault’s eCO2 commitment to produce environmentally-friendly cars for the whole life cycle of the vehicle.

The new Mégane E85 uses a 1.6 16V 105 engine which has undergone a number of modifications to adapt it to bioethanol fuel.

The main upgrades have been made to the fuel tank, injection system and combustion chambers.

The new vehicles were developed with input from expertise developed in Brazil, where Renault has been selling FlexFuel versions of its Clio and Mégane running on bioethanol E100 since 2004.

Renault said the benefits of an E85 fuelled model were particularly relevant for the fleet market. A new tax incentive sees a 2% discount on employees’ taxable car benefits where the car is capable of running on an ethanol fuel based on a mix of at least 85% ethanol with conventional petrol.

Prices and full specification information will be announced when the Mégane E85 goes on sale at the end of this 2007. 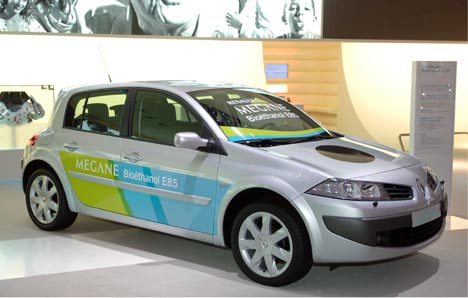