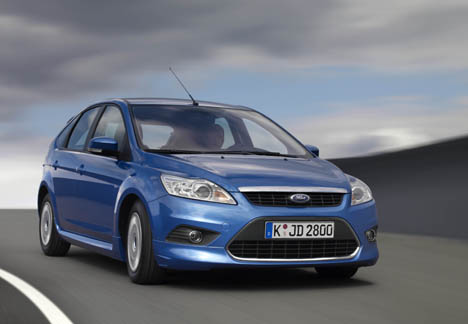 Ford will reveal its facelifted Focus at the Frankfurt Motor Show today.

The new car features Ford’s kinetic design which can be seen on the new Mondeo, S-Max and Galaxy. Three-door, four-door, five-door and estate body styles will be first in UK showrooms late this year. Coupé-Cabriolet and ST sporting flagship variants will arrive in spring 2008.

Inside, the instrumentation has been re-designed and, along with all other interior controls, is illuminated in red. Controls for the upgraded audio equipment and two-zone air conditioning have also been given a refresh.

The Titanium trim level now includes a new centre console (optional with Zetec and part of the Sport Pack), which adopts the 'kinetic design' look.

Along with the aesthetic changes, Ford is adding a new automatic transmission option to the Focus line-up. The Ford PowerShift transmission will be available from early 2008 in the new Ford Focus as well as the Ford C-MAX, in combination with the 134bhp and new 108bhp versions of the 2.0-litre Duratorq TDCi engine.

Prices will be announced closer to launch.