Corvette heads for the UK

Was this article useful?
Click the thumbs up >
The latest version of one of America’s most iconic sports cars, the Chevrolet Corvette ZR1 will be available in the UK in left-hand-drive only from the end of this year, although the order book is already filling up.

The new model has been made in limited numbers and is powered by a new LS9 supercharged 6.2L V-8 engine. Orders have already been placed from customers in Britain.

A spokesman for Chevrolet in the UK said at the Detroit Motor Show that five orders have been taken for the supercar which will cost around £80,000.

He added: “While that does not sound like a large number, we are not sure how many we will get as the production run is strictly limited.”

Ed Peper, general manager of Chevrolet in the USA said that the ZRI also has an “exceptional” power-to-weight ratio, adding: “Better than the Porsche 911 GT2, the Ferrari 599 and even the Lamborghini LP640. In fact, the ZR1 is expected to be the first production Corvette to achieve a top speed of at least 200 mph.”

Also coming to the UK, probably in 2010, will be the Hummer H4 off-roader and the Saab 9-4X, shown in concept form at the show. 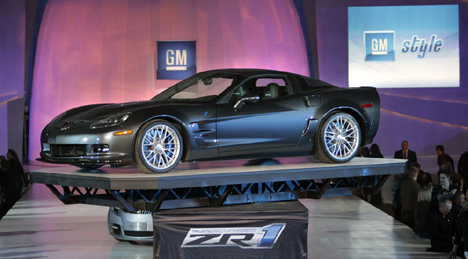