Was this article useful?
Click the thumbs up >
Remember the Volkswagen Scirocco and Corrado? Fans of compact coupés talk fondly of Volkswagen’s affordable sports cars from the 1970s, 1980s and 1990s, ruing the day Wolfsburg pulled them from its brochures back in 1995.

But they won’t be pining for much longer – VW is launching a new coupé successor this summer.

The new Scirocco, revealed in this exclusive photograph, takes on where the old one left off – it’s an affordable, fun sportscar based on family underpinnings nabbed from the Eos and next-generation Golf ranges.

Despite the light disguise on this prototype testing at the Nurburgring circuit in Germany, you can plainly see the car’s stubby dimensions and sporty profile. It’s a classic three-door coupé shape with a practical liftback boot to swallow weekend-away luggage and wide-opening doors to give access to the occasional rear seats.

Naturally, the Scirocco will cost more than the Golf on which it is based and prices will span from £18,000 to £22,000. The upper echelons of the range will use Golf GTI power for decent performance and sources in Germany hint that a hot R36 version using a muscly V6 engine is under development.

If you can’t wait to see the finished car this spring, just look at the Iroc concept car from 2006. The production car is virtually a carbon copy. 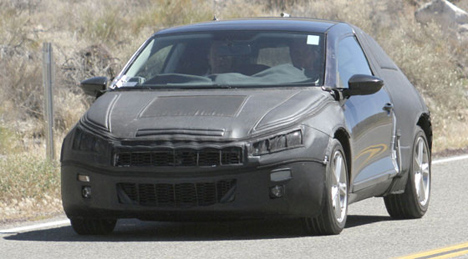 Timetable: See the finished Scirocco at the Geneva Motor Show in March. Sales in August 2008.