The most popular company cars of 2007

Was this article useful?
Click the thumbs up >
Vauxhall, Ford and Volkswagen dominate the list of the 10 most popular company cars supplied by Lex during 2007.

According to the Lex list for 2007, Vauxhall, Ford and VW took seven out of the top 10 places.

The cars that rose in popularity by volume were the Audi A3 (fourth place) and Ford Mondeo (fifth), both of which were not in the top 10 in 2005 when Lex last carried out the survey, while the VW Golf fell the furthest from first in 2005 to ninth in 2007.

Diesel models continued to dominate the fuel mix in 2007, accounting for 80% of all cars purchased, compared with 64% in 2005. With company car drivers benefiting from lower benefit in kind tax costs and lower personal fuel bills from choosing a diesel, these figures could rise still further in 2008.

Steve Jones, Lex pricing manager, said: “The last few times we have carried out this analysis a Focus/Golf/Astra sized car has proven the most popular fleet car.

“The Government’s move to a carbon dioxide based benefit in kind tax system has certainly helped encourage company motorists to downsize their choice of car. And with more different versions of the same car being launched by manufacturers, company motorists have got a wider choice than they have ever had before.” 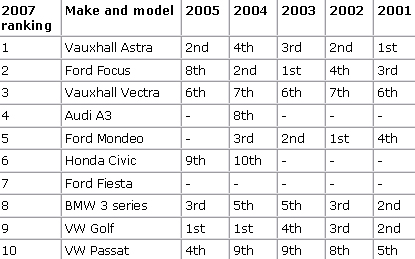