Was this article useful?
Click the thumbs up >
Self-styled adventurers Andy Pag and John Grimshaw have returned from an 8,500km drive from the UK to Timbuktu using biodiesel made from waste chocolate.

The pair from London and Dorset delivered a biodiesel processing unit to MFC, a local charity.

Independent analysts Carbon Aided estimate that the net effect of the expedition will actually save 15 tonnes of carbon emissions making this the first ever carbon negative expedition.

Along the way the duo had to battle with sand storms, corrupt customs officers and narrowly escaped a shoot out with Al-Qaeda.

Their journey wasn’t made easier by their choice of vehicles, all rescued from scrap yards and including a Toyota Landcruiser.

We are always being told that to be green you have to buy the latest gadget”, said Grimshaw.

“But I don’t think we should be so quick to throw things away.

"There’s still plenty of life in these old vehicles.”

"We're not environmentalists at all," Pag points out.

“We just wanted to do a trip that wouldn’t have a detrimental effect on the environment, and the more we learnt about biodiesel the more we thought that’s how we can do it.”

The pair successfully arrived in Timbuktu on Boxing Day and next year Pag plans to fly a paramotor to China using carbon neutral fuel made from landfill waste.

Pag said: “My first step: I need to learn to fly.” 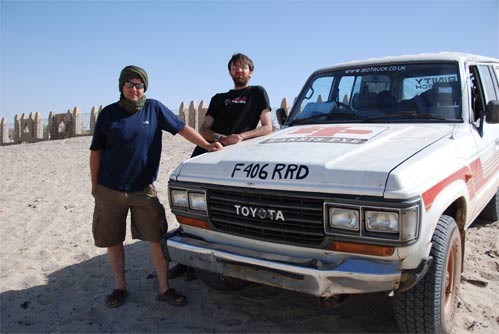