Yaris does the distance in MPG marathon 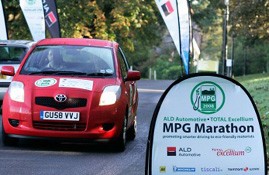 Ross Durkin, Publisher of Fleet World said: “It’s not what you drive, but how you drive that makes the difference.

"Naturally if you drive carefully in a vehicle which is already highly economical you will reap double the benefit, as the performance of the Toyota Yaris in this year's event clearly demonstrated."

A Citroen Nemo 1.4HDi now holds the title as the UK’s most fuel efficient van after recording 84.09mpg during the two-day event.

Another strong performer in the van section was a Vauxhall Combo driven by Steve Johnson, director of communications for driver education specialist DriveTech.

The frugal engine returned 81mpg which equates to 5.51p per mile.

Showing that you can still be fuel efficient even in a supercar was Press Association journalist Richard Hammond who recorded 30.96mpg in a Corvette Z06.

The 198mph American motor was crowned overall winner after the test on Wednesday, October 8 and 9.