Bank takeover means all change for finance and insurance

The dealer finance market is to undergo radical consolidation in the months ahead. The anticipated combination of Black Horse Motor Finance and Bank of Scotland Dealer Finance, following the Lloyds TSB/HBOS deal, is part of a radical change that is set to see F&I turned on its head.

Retailers should be acting now to review their F&I and stock-funding operations and plan for the future – a future where the income available from F&I looks set to fall.

Levels of finance penetration until this year had declined, but astute negotiation and over-supply has seen retailers increasing the pound value from F&I income.

Even the regulation of personal protection insurance (PPI) failed to slow the pace of growth in the importance of this key
profit centre.

Now the intense competition which has benefited retailers, looks set to change – significantly.

Day-to-day retailers are likely to see little immediate impact and HBOS’s Andy Hornby admits that the total Lloyds TSB/HBOS integration could take up to two years to complete, but change should be anticipated and acted upon now.

Most worrying for retailers will be the loss of choice. The Big Four independent finance players are set to become the Big Two, with Consumer Santander and GE Money Motor Finance merging in the weeks ahead.

Inevitably, there will be changes in people, technology and processes. But most concerning will be the reduction in competition and the potential threat to stock-funding facilities. 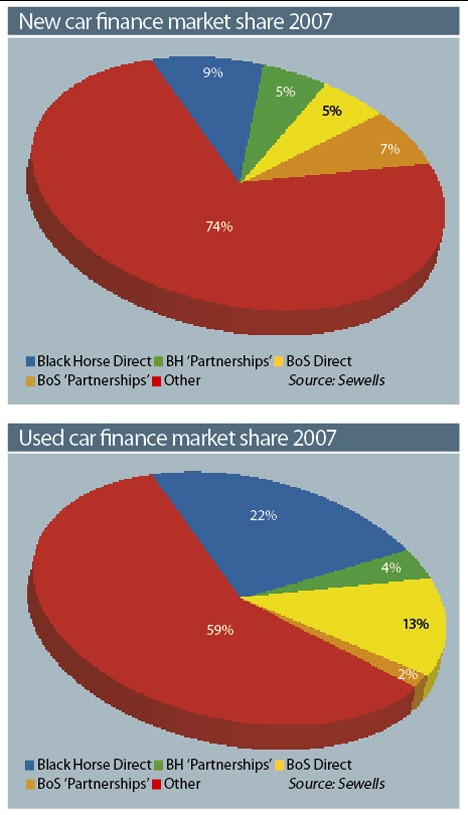 The combined Black Horse/Bank of Scotland Motor Finance operation will be a dominant force based upon the Sewells 2007 New and Used Car Finance House Surveys, which relies upon estimates of units financed.

In the new car finance sector the combined market share of the two companies is estimated at 26%, allowing for the inclusion of the manufacturer partnerships.

Many will find themselves already working with both companies – and will potentially need, or want, to source an alternative provider, both for retail support and stock funding.

But the drop in competition may make replacing current terms on a like-for-like basis tough.

Concerns about the potential increase in retail rates and terms may mask a more fundamental concern – stock funding monies.Motor retailers have commonly sourced their stock funding (and other forms of support funding) from finance companies as part of a wider retail support offer.

Black Horse and Bank of Scotland have been major players in the provision of stocking funds.

Quite how the combined business will view its exposure to dealer funding is impossible to second guess, but we are certainly operating in an increasingly risk averse environment, something not helped by the dramatic slowdown in car sales.

Retailers are faced with the possibility that the combined Black Horse/Bank of Scotland business may therefore seek to limit its stock exposure.

This situation is likely to be exacerbated at retailers where both lenders currently provide funds and therefore share the perceived risk.

Some retailers may prefer to not have all their stock funding in one basket. Retailers operating at the margins are certainly at risk of losing vital operating funds.

Black Horse itself notes that dealers and lenders alike will have to become leaner and fitter to survive, pointing to the pressure on finance companies to deliver acceptable returns to their parent companies.

In this environment, it expects rates and deal terms to come under the microscope.

This is a clear indication for the future – and it is a future that appears to be increasingly close at hand.

A reduction in competition, rising inflation, tightening of underwriting and a slowdown in the amount of money available to lend all look set to place motor retailers in a tough negotiating position for finance in the months ahead.

However, their appetite and capacity to match some of the existing F&I support packages in the current trading conditions must be in doubt.

There is set to be a cost to retailers to secure a future for dealer F&I – higher prices. This is probably a vital, albeit painful, step – one that can be anticipated in both retail and stock funding terms.