Daihatsu’s latest dealership Browns Lane Garage in Coventry is run by John Manning, who, unusually, was born on the premises 74 years ago. 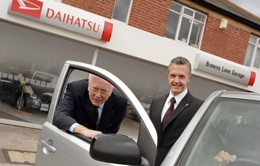 Manning, dealer principal, said: “The site originally included a butcher’s and also a grocer’s shop and I was born above the grocer’s 74 years ago.”

Manning added: “The family eventually turned the shops into a car showroom and I have been here ever since. This has helped us build up a loyal band of customers who have tended to stay with us over the years – very useful in these challenging times.”

The dealership opened a month ago with 10 staff, and has sold 11 new cars.

Daihatsu aims to have appointed 20 new dealers in 2008 and currently has 105 UK showrooms.