Blue is the colour of choice for used car buyers

Silver has been the most popular shade for new cars in recent years, and bright white paint options are a current favourite of the manufacturers, but when it comes to used cars, blue is the colour.

BCA analysed the colour spread of more than 125,000 vehicles from a huge range of sources and recorded hundreds of colours, ranging from Antique Green to Zambesi Silver.

However, once sorted into broad constituent colour groups, blue is most popular for used cars, but only by a fraction of a percentage from silver.

BCA’s UK operations director Simon Henstock commented: “There is of course an element of the self-fulfilling prophecy when it comes to the colours of used cars.

But you can choose between different colours on similar models and getting the right colour on the right car will make it a lot more appealing to the retail buyer. While there are no hard and fast rules, the colour needs to match the car.”

The issue with highly fashionable colours – such as the current high-impact white finishes – is that they can just as quickly become unfashionable.

“And underlining the growing numbers of women buying used cars, we are also seeing softer colours and finishes such as lilac, mauve and pearlescent becoming more popular.

“Smaller hatchbacks and city cars can carry off brighter colours with ease, while in the upper medium and mini-MPV sectors, most metallics go well, but nothing too garish.”

“Large slabs of bright colour can be hard on the eye, while at the other end of the colour scale, black looks too funereal for most motorists tastes.

“Flat colours just look drab on bigger vehicles, but can work in the rugged 4x4 market, where buyers seem to like utilitarian colours – muted greens, greys and yellows for example.

“For larger executive and prestige models, stick to popular colours but in sober shades – metallic silvers, blues and greens for example.”

According to BCA’s recent Used Car Market report, colour is far more important to younger used car buyers, with 12% of 17-25 year olds saying it was a crunch factor when choosing their last car, compared to the national figure of 7%.

Compare this to a figure of just 5% for all used car buyers aged over 55.

Henstock added: “As retail used car buyers cannot specify the colour they want, they choose the best combination of model, specification, age, mileage and condition for their budget and get the most attractive colour they can. 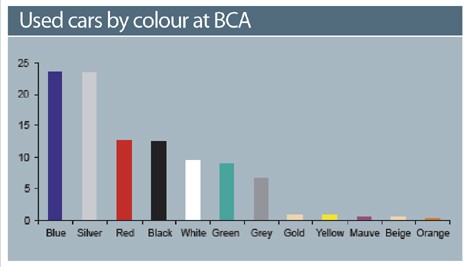 “The used car retailer’s skill is to match those expectations when buying in the wholesale market.”

This is where auction really comes into its own, by offering a wide choice of models in a good range of colours all on the same day, says Henstock.

“You can read the colour blue in a catalogue, but until you see the car in the metal you are unable to tell how attractive – and saleable – that car will be.”