Market performance continued to worsen into October as the established patterns deepened. That meant larger vehicles once again struggled as demand continued to shift towards the more economical end of the market.

CAP Black Book’s overall downward movement for all cars up to seven years old was 4% – significantly greater than September’s reduction of 3.1%.

This should come as no surprise due to the inevitable spike in demand across the market, brought about by the September plate change, followed by the onset of autumn.

The strength of demand for the smallest cars is signalled by the fact that city cars at 12 months/10,000 miles and three years/60,000 miles showed average rises in value, markedly bucking the market trend.

With ex-lease cars forming an important source of supply into the used car trade market, price performance against CAP is an important indicator.

A year-on-year comparison reinforces a view of the market as significantly weaker as time goes on.
One year ago, disposals were hovering around the 99% mark, but this year’s research data reveals typical disposal values closer to 94% during September.

This month’s research of performance on the retail forecourt reveals dealers struggling in an increasingly tough market.

In the latest monthly analysis of dealer performance, the proportion reporting a decline in used car sales rose from 51% to 65%. 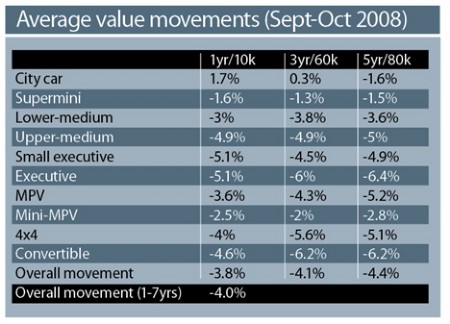 And year-on-year performance continues to worsen, with 76% of dealers reporting a decline – up from 70% in the previous month.

Drilling into the detail reveals an even gloomier picture. In the latest research, 26% of dealers describe their year-on-year picture as “considerably worse”, compared with 18% in the previous month.

Even consumer interest in researching potential purchases is now in decline. Recent months were characterised by customer enquiries and showroom footfall remaining buoyant while conversion to sale proved elusive. But even customer enquiries are showing signs of drying up. And dealers’ appraisal of the current business climate is becoming increasingly negative.

In August, 40% of dealers described current circumstances as “poor” and a further 22% said “very poor”.

By September, 42% were choosing “poor” to describe the current climate, but those choosing the “very poor” option almost doubled to 40%.

There is one glimmer of hope, however, in that fewer dealers are now forecasting further decline.