Ford has made a big noise about reducing its dependence on fleet sales and boosting its retail sales as well.

Of course, everyone says they want to reduce short-cycle business to daily rental companies, but is it happening?

Looking at sales into fleets in 2007 and 2008 shows some interesting developments (see table below). 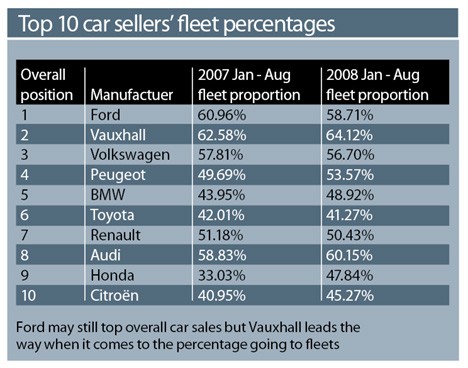 In both years, the highest proportion of fleet sales has come from Vauxhall, which is unsurprising given its reputation as the king of that particular market.

However, it is noticeable that Ford seems to be walking the walk – in 2007, it had the second highest fleet proportion (as you would expect), but this year it is down to fifth place, having dropped its fleet proportion by 3%.

Interestingly, it has been overtaken by three more upmarket brands – Saab in third place is no surprise, given its relationship to Vauxhall, Volvo is fighting hard to recover ground in the UK, but Audi is a bit of a surprise.

Its fleet proportion is well ahead of BMW and Mercedes, although this fact does not seem to be harming its image with retail buyers.

In fact, Ford is very unusual in significantly reducing its fleet proportion in 2008. Of the other top 10 brands (see table), only Volkswagen, Toyota and Renault reduced their fleet proportion – all by less than 1% – while Peugeot, BMW, Honda and Citroën all increased theirs by more than 4%.

Outside the top 10, one of the most significant changes was Land Rover, which shot up from 28% to 38% – evidence that retail buyers are especially averse to rising fuel costs.

At the other end of the table, the brand with the most potential is Suzuki, with a tiny 6.2% fleet proportion.

The excellent Swift has transformed Suzuki’s prospects with retail buyers, but that is yet to feed through into the fleet market. It is no wonder Suzuki is planning an assault on fleet sales.

The other brand with an unusually low proportion of fleet sales (albeit rising) is Mini, with 27.4%. With capacity constraints, Mini is in no hurry to push fleet sales past their natural level – but it does provide an interesting perspective on what is a natural level.

While a Ford or Vauxhall would probably not want to go below 50%, Mini does raise a question mark over the fleet proportion of some of the non-volume brands.