Dealers are reeling from one of the worst sales months in decades after new car registrations fell by nearly a quarter.

With no sign that the market is to improve, the Society of Motor Manufacturers and Traders has revised its year-end forecast for 2008 to 2.15 million vehicles, a 10.7% decline.

It estimates that next year’s market could fall to 1.92 million units – the first time it would have dropped below two million for 14 years.

Paul Everitt, SMMT chief executive, said: “October has proved another difficult month for the UK motor industry and action is needed to help restore consumer confidence and encourage buyers back to the showrooms.

“Cuts in interest rates that are swiftly passed on to consumers, scrapping planned increases in VED and maintaining public expenditure on new vehicles are essential parts of the package required by industry.”

Good news came hours after the figures were released with the Bank of England cutting interest rates by 1.5% to 3%.

Sue Robinson, director of the RMIF, said it was “positive news for consumers and business”, providing the saving was passed on quickly by banks to restore confidence in the marketplace.

John Cleland, dealer principal of Scottish-based Cleland Jaguar and Volvo, said: “The reason for the Jaguar increase is fairly simple: the new XF.

There was a sizeable pre-order bank and it’s proving a very popular new car. Also, interest in the revised X-type has shown there is life in that car yet.

“With Volvo, the situation is more complex, but it is mainly down to three factors.

“The decision by Volvo to enter into Motability this year has provided us with volume, and it’s proving good business too, while the new R Design models are much sportier and attracting new buyers to Volvo.

“Thirdly, Volvo finally appears to have got its marketing and advertising sorted out.” 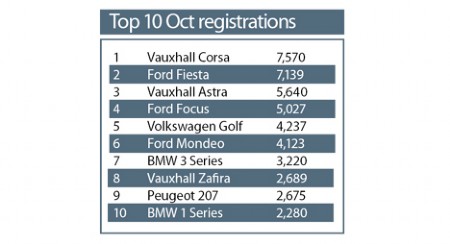 Land Rover continues to suffer from the combined effect of a straightened economy and environmental pressure, with sales down 58%. A spokesman said potential customers were holding off from committing themselves in the premium sector.

“There is no doubt that the next 18 months are going to be extremely difficult,” he added.
Renault and Peugeot sales plunged 40% in October.

Renault said its long-term strategy to focus on profitable business has brought a “short-term but planned reduction in volume.” Peugeot blamed a lack of new product and small car buyers being sensitive to economic pressures.

Mini took a 40% hit too, although executives claim sales last October were exceptionally high, and its targeting of the US market has meant less availability in the UK.

Overall for the year, Mini is down 9%, and still retains its market share, suggesting it is performing in line with the overall market.