When Chung Ju-Yung launched a small vehicle repair shop in 1947 he could never have envisaged his company would grow to become the world’s sixth (soon to be fifth) largest
vehicle manufacturer. The fact that the company only started vehicle manufacturing in 1967 makes its growth even more astounding with an annual output of some 3.7 million vehicles.

Hyundai has built its reputation on producing value-for-money models in several market sectors from small hatchback to large 4x4 models. But is that value reflected in the price of its spare parts?

The dealer prices were supplied by Hyundai UK and the competition comes from an internet retailer, internet parts specialist and an independent factor/retailer. 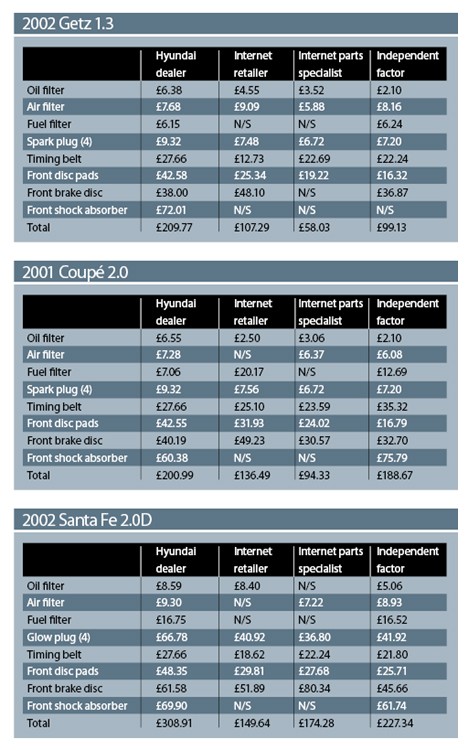 The Hyundai parts prices remind us of those we used to experience some years ago from Japanese manufacturers such as Toyota.

Against mainstream European competitors such as Peugeot and VW they are, with the honourable exception of the Coupé, more expensive than similar models but given their relatively small market share it is probably to be expected.

The market share also explains the relative lack of aftermarket parts for Hyundai models although they are well catered for by specialist Far East parts distributors such as ADL Blueprint, Nipparts and Comline.

While none of the individual dealer prices can be viewed as excessive (except, perhaps, for the oil filters) they do carry a premium compared to most other volume VMs.

As the models become more common in the aftermarket and its market share increases, so we believe that Hyundai genuine parts will fall in line with the competition and the non-specialist aftermarket parts companies will raise their coverage of Hyundai models.