In the aftermath of the September sales figures, the industry pored over the figures looking for any crumbs of comfort.

The conclusion was that if you made a small, upmarket car sold with lots of accessories, you probably did OK.

However, there are a limited number of models which meet that definition.

Everywhere else, the news is generally grim.

There is a reverse alchemy going on in the market – cars that were once golden are now turning into lead.

Luxury saloons are down by a similar amount YTD and sports cars/coupés only look respectable because of the new Audi A5.

The only segment to grow has been city cars, which has suddenly mushroomed into a mainstream sector.

From under 4% market share in 2005, it has risen to 6.9% YTD 2008. That makes it broadly comparable to the upper-medium or off-road segments – unthinkable just a few years ago. 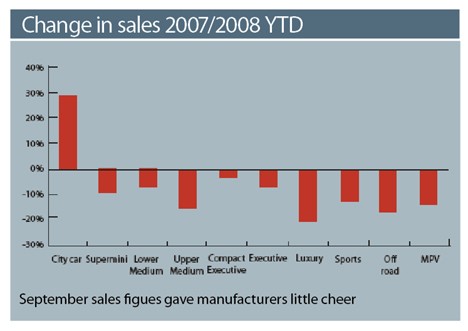 Vauxhall is not going to want to sell more Agilas at the expense of fewer large cars. It is better than selling nothing at all, but that is about the best you can say.

The other main beneficiary of the downsizing trend was the lower-medium segment which did fall, but managed to improve its market share.

As buyers trade down from upper-medium models, cars like the Volkswagen Golf are maintaining sales in the face of the downturn.

Indeed, sales of prestige lower-medium models are actually rising – up by a remarkable 17% so far this year.

Of course, the same principle applies – BMW would probably rather sell more 5 Series than more 1 Series, but at least the
1 Series is a lot more profitable than a city car.

Looking to the future, no-one expects much relief any time soon. With pan-European sales expected to be down by 8% in 2008 and 10% in 2009, there are going to be a lot of factories churning out unwanted cars.

Car companies are talking about cutting capacity, but cuts of almost 20% over two years will be hard to achieve just by short-time working. Whole factories would have to close and that is politically very difficult. So marketing is likely to get even more frantic over the next couple of years.

For all the manufacturers’ talk of long-term brand-building, deals are likely to be the only currency that matters for a while yet.