Fiat has awarded an Abarth franchise to Guernsey dealer group boss Dave Beausire who has grown sales of new Fiats over the past five years. 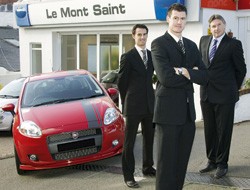 Beausire, who founded Le Mont Saint Garage 21 years ago, and his wife Jackie have this month appointed two more directors – their sons Peter and Mike. The company started with four employees, and now has 10.

The Guernseyman is completing a £60,000 revamp of the family’s dealership to reflect higher sales and the arrival soon of the Fiat 500 Abarth.
Beausire, a former chairman of the Guernsey Motor Trades Association, started the business with an independent garage.

His first franchise was Subaru, which he gave up this year. “There’s nothing wrong with Subaru’s products but I did not like the way the UK management treated us,” he said.

“It took us three years to decide to concentrate on Fiat, and I’m now glad we did.”

Fiat was added in 2003, and he won the franchise at a time the manufacturer was considering pulling out of the island.

Guernsey, a popular right-hand drive holiday destination, has a big demand for rental cars, especially in the summer.

Beausire said some manufacturers use the demand for three-and six-month rental contracts. Then the cars are shipped back to the UK mainland for sale through their dealers.

In the first nine months of this year, Beausire said he sold 190 Fiats, more new retail cars than anyone else on the island – and took 5.25% of Guernsey’s total market of 3,622 registrations, including rental cars.

Ford registered 2,004 units. Hyundai was second in the retail market, with 172 sales.

With Abarth, and next year’s 500 convertible, Beausire expects further growth in 2009 – he said his Fiat sales have topped a total of 700 over the past five years.

He added that the Fiat 500 is suited to Guernsey, a small Channel isle with its narrow and twisting roads.

“We are already getting a demand for used 500s, and I expect some back as part-exchanges when owners want to trade up to a 500 Abarth,” said Beausire. “We know the next 12 months or more will be difficult, and Guernsey – like everywhere else – will be affected by the economic showdown.”