Market trends: City cars in a class of their own

In today’s recessionary market, there are two things that you can rely on: each market segment is seeing fewer sales and the cars that are being sold will have a smaller engine size than last year’s.

Those two things are true in every segment except city cars which, uniquely, are seeing both a growth in sales and a growth in engine size.

Market share this year is 6.9%, having reached a peak of just over 8% in August and September – that made the segment the third biggest in the UK in September, ahead of upper medium, compact executive and off-road.

Even last year, that would have been unimaginable as city cars were then the sixth largest segment, at just over half the size of the upper medium sector (see graph).

Until the Ford Ka arrived, the best selling city car was the Fiat Cinquecento with 899cc and 41 bhp. That specification would now be greeted with laughter.

So, should manufacturers be happy that at least one segment is developing nicely? Not really, because this is the segment with the smallest profit margins.

It is better than selling no cars at all, but city cars will not repair the battered balance sheets of the carmakers. 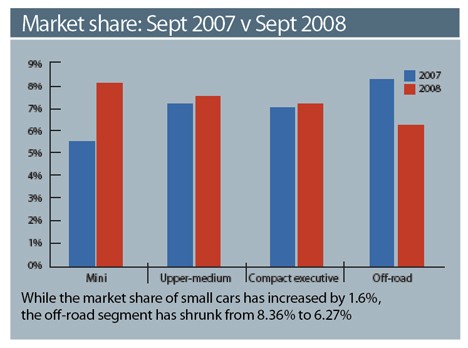 The only hope is to create ‘designer’ small cars rather than ‘utility’ small ones. Vauxhall, for example, now has a vastly better Agila to sell, but that is not really the point – functional small cars are not what the market wants.

If buyers want decent space with low purchase and running costs there are lots of pre-registered or ex-demo superminis to choose from. Indeed, the new Agila actually has a lower segment share now (2.7%) than its inferior predecessor did three years ago (4.0%).

While everyone knows about the success of the Fiat 500, which is now up to third place in the segment behind the Ka and 107, there has been another, lower profile success story.

The Smart Fortwo has been largely overlooked as the brand itself was so tarnished by the debacle of the Forfour and the speculation a couple of years ago about Mercedes closing down the whole operation.However, it is now taking 4.9% of the segment and is up to seventh place, ahead of models like the VW Fox and Chevrolet Matiz.

With the Smart and Fiat 500, the city car segment is starting to look like the most fashion-conscious part of the whole car market.