In the last Parts Comparison of 2008 we look back over the year’s surveys by comparing the dealer prices from different manufacturers within several market sectors.

Traditionally ‘British’ marques such as Ford have always been perceived as having the cheapest parts ranges, but is this still the case? Has the introduction dealer parts clubs had an impact? Have the Asian marques caught up with their pricing policies?

To find out, we compare the prices of both European and Far East marques. We look at Audi, Citroën, Fiat, Ford, Hyundai, Mazda and Toyota at three different levels – small hatchback, medium petrol saloon hatch and medium-large diesel.

Our comparisons throw up a few surprises which would have been unthinkable only a few years ago. 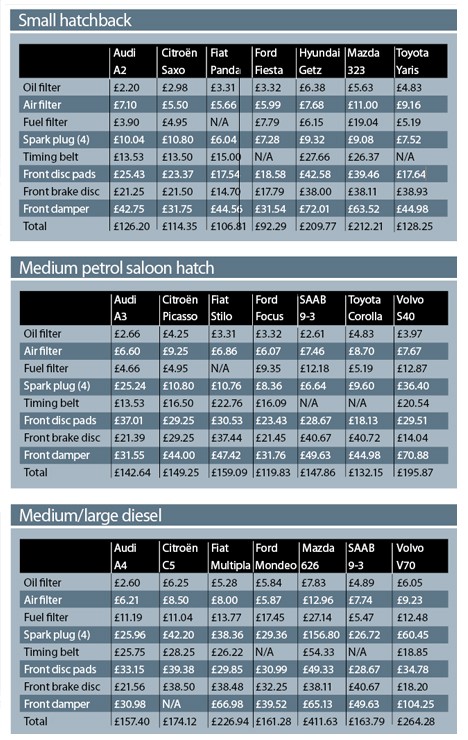 Ford takes the honours here with the only basket that comes in under £100 but it’s getting close, particularly when you realise that the Ford engine is chain driven.

The biggest changes come from Audi and Toyota both of whom have previously been at the higher end of the pricing scale. Although Hyundai is a ‘budget’ brand in terms of vehicle pricing the same does not apply to its parts offer which, like Mazda, is almost twice as expensive as the competition.

Again it’s Ford that leads the field with a very keen set of prices on its market-leading Focus model. After that there is little to choose between the competition with the exception of the Volvo prices which are 25% higher than ‘same-sector’ rivals Audi and Saab.However, the overall trend for parts prices within this key sector is definitely downwards as a glance at surveys we carried out a few years ago show prices almost 30% higher on average for many of these models.

‘Oil-burners’ parts prices are, in many cases, similar to the petrol models, which is a turnaround. VW/Audi’s TPS programme has certainly caused a stir in the market and to see the A4 lead the field is remarkable.

The Volvo probably sits uncomfortably here and needs to be compared with marques such as BMW and Jaguar. The Mazda prices are, as we said at the time, simply horrendous with the glow plugs showing that not every manufacturer has seen the light on this item.

This is the first time we have ever compared VM prices directly and although it is not a precise science given the differences between the various models it does give a feel for the trade prices charged by franchised dealerships to independent repairers.

Ford, as ever, puts in a creditable performance in all three sectors and confirms that the ongoing costs for Ford owners remain reasonable. However, the surprise packages of the last year have been Audi and Toyota, both of whom would previously have been regarded as being at the top end of the replacement parts market.

Volkswagen Group’s TPS scheme and the Toyota First! club have put both manufacturers in direct competition with the aftermarket and compete very well with Ford’s Parts Plus and Vauxhall’s Trade Club programmes.

Citroën (along with Peugeot) has always scored well and remains highly competitive as does Fiat.

Saab prices seem to mirror those of Ford and Audi rather than its home competitor Volvo.
The only manufacturers who still seem to cling to high dealer pricing are Hyundai and Mazda, both of whom are a throwback to the ‘anywhere but the dealer’ culture, in pricing at least.

Overall, though, the picture is clear; no longer can the aftermarket compete against the dealerships on price alone with VM parts often matching and sometimes beating traditional motor factor offers.