November’s dramatic 36.8% year-on-year plunge in new car registrations was in part caused by dealers persuading buyers to wait until December 1.

This way, they pocketed the VAT saving, worth on average £250, says the SMMT.

One dealer group boss said: “We could have done with the money last month because cash flow is a problem but we talked to customers. There was a slight issue on residual values but there was a saving for them and it was good PR for us.”

Paul Everitt, SMMT chief executive, acknowledged some buyers took advantage of VAT falling from 17.5% to 15% until the end of 2009.

“Demand though continues to fall,” he said. “Urgent action is required to ease access to credit and finance, both to support consumers and meet industry cash-flow needs.”

November’s market barely reached six figures (100,333 units), and that was achieved only through bouts of self-registrations, according to industry sources. Last month 58,402 fewer cars were registered than in November 2007. 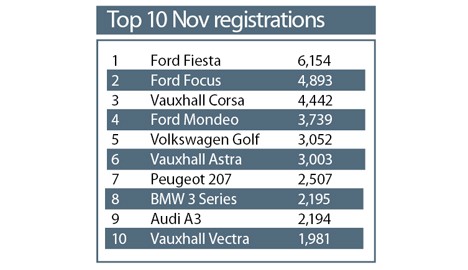 “Manufacturers are making too many cars, and sending too many to dealers. They then offer dealers incentives to dispose of them. Dealers are also pressed to take too many demonstrators,” said one analyst.

Retail buyers were scarce in November and the sector fell by 45.1%. Over the first 11 months private buyers registered 853,303 cars ­– 141,450 fewer than at the corresponding point last year.

There was one positive to record in November, with diesel cars achieving a record 47% share. But the total fall was the sharpest in one month since June 1980, apart from in 1999 due to the move to twice-yearly plate changes.

November typically accounts for 6.8% of annual volumes, but this year it’s expected to take less than a 5% share. Many carmakers suffered savage year-on-year dips last month. One was Renault, whose November 2007 total of 8,364 shrank this year to 3,012 (a decline of virtually 64%).

A Renault UK spokesman said: “Our November performance was in line with our market expectations.

“We continue to move away from less profitable fleet business, particularly short-term rental. We have a planned volume reduction in tactical pre-registrations.

This is to manage stock levels and is providing our network with one of the best used car performances in the business.

“Our year-to-date performance in private retail is up on the same period last year, and next we will see the impact of our new models – the Megane hatch and coupé, and Laguna coupé.”

Proton achieved 113 November registrations – the same number as a year earlier. All other brands fell, Volvo by the lowest margin (6.72%).