Signs of normality return to markets

The used car market downturn of 2008 was among the first signs that Britain would enter recession. But it’s true significance is deeper than that.

It was only in part fuelled by external economic events such as crisis in the financial sector, negative house price inflation and fears of growing unemployment.

Deeper analysis reveals an already growing underlying problem with residual values, ranging from misplaced industry optimism and flawed understanding in regard to trends, to a fundamental misalignment of the new and used car markets in terms of customer requirements.

What the wider economic downturn created, however, was the acceleration of a slow long-term decline of underlying residual values into an undisputed crisis.

CAP’s decision to announce a full market re-forecast in November represented the return of clarity around future prospects. Only near the end of the year could decisions be made with any degree of confidence and responsibility.

Although the re-forecast did, in many cases, see values revised.

With the benefit of hindsight, it is clear that the seeds of the downturn were already sprouting in the autumn of 2007.

After the hard landing that closed 2007 and the slower-than-expected start to 2008, February saw confidence returning to the market.

Black Book reported an improvement in dealer sentiment and an increase in stock purchase activity. Moving into early March, Black Book was reporting less cherry-picking of stock and an air of ‘cautious optimism’ in the market.

Auction conversions were up, along with performance against CAP Clean. But there was an increasing undercurrent of concern among dealers that these activity levels would not be maintained.

The Easter holiday period was extremely buoyant, driven by low prices pulling buyers back into the market.

April’s edition of Black Book – published on the basis of hard evidence – reported end-of-lease conversion rates at their highest level for 12 months, the strongest average price performance for six months, manageable volumes in the open market and healthy retail demand.

This would prove to be the market’s last gasp before consumers began to rein in spending on big ticket items. The market slowed dramatically, fuelled by the next shock in the form of changes to Vehicle Excise Duty based on CO2 emissions. 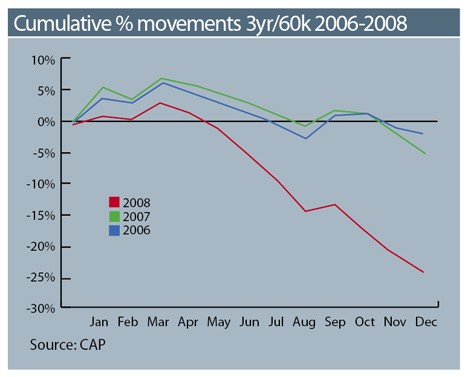 We now believe that the announcement of new VED rates was the blow which pushed a market already on the edge over the brink. The fact that the changes were to be applied retrospectively – thereby affecting cars registered from March 2001 – severely disrupted retail interest in larger cars across the board.

The pattern throughout the summer was of haemorrhaging demand and values for expensive-to-run cars. Inevitably, some reporting verged on the hysterical with claims that some large 4x4s were – to all intents and purposes – worthless. The damage was deep and unstoppable as the bad news snowballed.

The overall market slowdown began to show signs
of reducing – perhaps surprisingly – as autumn began to close and the certainty of recession was finally established.

The December edition of Black Book noted that values continued to drift downwards, but more closely in line with seasonal norms than the freefall that was observed a few months ago.