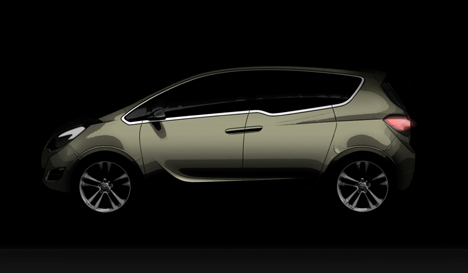 Vauxhall is revealing its new Meriva concept bit by bit before it will make its debut at the Geneva Motor Show on March 4.

The company has already released a concept sketch and now it has revealed a shadowy side on shot.

Although this highly stylised version of the Meriva is unlikely to make it all the way to production, it does contain future technology which could be used on the finished version like FlexDoors.

The new system features rear-hinged rear doors on both sides. While the front doors are conventionally designed with front hinges, the read doors swing open towards the back of the car.

The front and rear doors can also be opened independently of each other. Vauxhall says rear-hinged doors already on the market can only be opened after the front door has been opened, which limits practicality.

“With the Zafira’s Flex7 seating system and the Meriva’s FlexSpace concept, we took on a similar role in interior flexibility.”

Vauxhall’s other monocab designs like the Zafira and current Meriva models took 335,00 sales combined in 2007.

It’s new monocab Agila allows Vauxhall to offer an entry-level monocab in the mini-car segment. It said every fifth Vauxhall model sold today is a monocab, while in the total market it is just every eighth car.