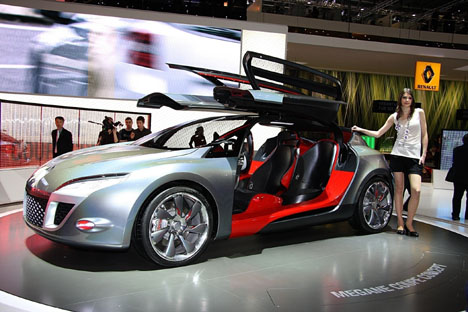 There won't be a traditional three-door hatchback version of the new Megane – instead the range will gain a coupe based on the concept coupe unveiled at the Geneva Motor Show yesterday.

Patrick Le Quement, Renault design director, said the car would be launched before the end of the year along with a more conventional five-door version. And while the new Megane is “a strong design statement”, Le Quement believes it will not polarise opinions in the same way as the current model.

“Those that didn't like the current model at first never did grow to like it,” he said. “The new model won't have the upright line at the rear – it will be more acceptable - but it will shake its arse for sure!”

Renault will also shorten the timespan of the model renewal programme. “The entire Megane range will be renewed by the end of 2009,” said Le Quement. This includes saloon, coupe-cabrio and estate bodystyles, plus “at least one more model”.

The Scenic MPV will remain in its current form for a little longer, however, with the third-generation version due in about 18 months.

Renault also showed the production version of its Koleos SUV for the first time. This is built by Renault Samsung in Korea and is the first of a family of Renault SUVs. “Koleos is in the middle of a three-model range,” said Le Quement.

Next up is a smaller SUV to compete with the Ford Kuga, and a larger 4x4 will follow. Le Quement confirmed there would be 4x2 versions of Koleos as well.