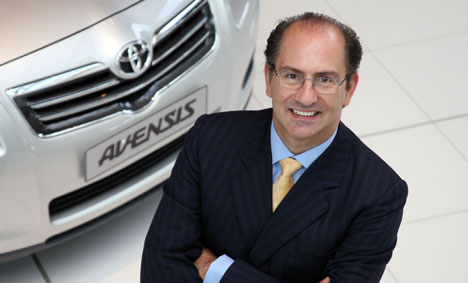 Some dealers feel that the changes will stifle profits; others believe that there is more opportunity for them to make money if they do a good job.

It’s convinced that the changes will drive up customer satisfaction, encourage staff development and enable dealers to raise profits.

According to Toyota GB managing director Miguel Fonseca: “The margin potential for the network this year is greater than in 2007. Our realignment will drive averages up.”

But he acknowledges that some retailers are concerned. Some of this he puts down to misinterpretation.

“We understand they have some concerns about all the changes,” Fonseca told AM during a two-hour meeting at Toyota’s Epsom HQ with commercial director Jon Williams and sales director Michael Cole.

“Our focus was to take out bureaucracy and to base the margin on qualitative not on volume sales. It’s been picked up the wrong way.”

The main adjustment to the structure sees the standard variable margin fall from 7.4% to 7%, while a performance bonus, called Brilliant at the Basics and worth 0.6%, has been dropped.

Plugging this 1% deficit is an additional 1% variable bonus available for the top performers in Toyota’s Complete Customer Satisfaction (CCS) programme.

In addition, an annual volume bonus of 1.5% replaces the quarterly scheme.

Williams says the dealer council was consulted “at length” about when to implement the new scheme: “We made the changes now so there is the chance to get everyone used to the new way of working, ready for our exciting product launches in 2009.”

The CCS programme has been developed from Toyota’s existing CSI scheme.

It added a crucial additional question to the standard 37 satisfaction questions asked of sales and aftersales customers: “How do you rate your satisfaction level – less than satisfied, fairly satisfied, very satisfied or completely satisfied?”

This 38th question has a bonus element worth 2%.

The bonus is achieved from the percentage of completely satisfied customers judged on a sliding scale based on the network’s previous 12 months’ performance.

Toyota says its centres are averaging around 65% completely satisfied customers on sales and 45% on aftersales.

It claims they will get the same average margin as before, but the best will get an additional 1%, taking the bonus to 3%.

“There won’t be any partner that will get less than 1%; many will get 2%,” says Williams.

As justification, Fonseca adds: “70% of completely satisfied customers will recommend the brand.

They are four times more likely than very satisfied customers to recommend.”

He believes there is confusion over interpretation of the standards and the rankings and says Toyota needs “to find a way” to help centres understand how to work with the scheme.

In March it held a series of regional meetings with centre principals and aftersales managers; this month it has taken to the road again to talk to sales managers and principals.

Toyota has also armed field staff with data from its new Toyota Retail System portal (see AM November 2, 2007), which collects best practice from the top retailer performers on CCS, sales and aftersales.

Fonseca shrugs off concerns that issues outside dealers’ control, such as delivery delays or recalls, would damage CCS scores.

But he adds: “If we had a catastrophe, we would have to be flexible and accommodating.”

Fonseca concedes that first quarter profits will be down but he is adamant that performance will improve in quarters two and three.

It is being comfortably achieved by the top quartile but the bulk of the network is falling a long way short.

But improving it doesn’t just depend on Toyota; it also depends on dealer performance and market conditions,” Fonseca says.

He adds: “Two per cent is a vision; it is not a commitment. We commit to do every-thing under our power to work towards it and we are confident that we have the right mix of tools to drive profits forward.”

In response to dealer complaints that Toyota has premium franchise costs but volume franchise returns, he says: “They are wanting a change – yes? That is what we have done; that answers the question.”

Some hovered just above breakeven.

“Dealers with the worst CS and staff retention are at the bottom of the profit list – our margin structure is now set up to tackle this.”

Toyota has had a rough start to the year with first quarter new car sales down almost 9% year-on-year.

Despite this, Fonseca expects to end the year slightly up, on 119,250 new car sales. He expects a strong second and third quarter, helped by “fleet calendarisation” and retail sales.

“Last year we had a shortfall in the second and third quarter with retail – this year we will not allow that to happen,” Fonseca says.

Quarter one last year was a record sales period for Toyota but some cars were pushed into the market.

“Our performance in 2008 will be genuine performance; it will be stable and sustained throughout the year. We have a healthy mix of 57% retail to 43% fleet and there is no policy from us to encourage the network to push registrations.”

He adds that the recent circular sent to the network with details of 928 Auris TRs allocated by retailer was for a purchase bonus and was not a registration exercise.

“Some of these cars were already sold and we still paid the extra margin. Some dealers were asking us for more,” he says.